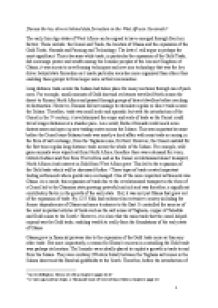 Discuss the key drivers behind state formation in the West African Savannah. The early Iron Age states of West Africa can be argued to have emerged through four key factors.

﻿Discuss the key drivers behind state formation in the West African Savannah? The early Iron Age states of West Africa can be argued to have emerged through four key factors. These include: the Camel and Trade, the location of Ghana and the expansion of the Gold Trade, Nomads and Farming and Technology. The latter I will argue is perhaps the most significant. This is because while trade, in particular the expansion of the Gold Trade, did encourage power and wealth among the Soninke peoples of the Ancient Kingdom of Ghana, it was access to new farming techniques and new iron technology that was the key driver behind state formation as it made particular societies more organised than others thus enabling these groups to form larger more settled communities. Long distance trade across the Sahara had taken place for many centuries through use of pack oxen. For example, small amounts of Gold dust and red stones travelled North across the desert to Roman North Africa and passed through groups of desert dwellers before reaching its destination. However, Romans did not manage to stimulate regular or direct trade across the Sahara. Therefore, trade was small scale and sporadic but with the introduction of the Camel in the 5th century, it revolutionised the scope and scale of trade as the Camel could travel longer distances at a steadier pace. ...read more.

They were midway (Western Sahel) between the Taghaza salt mines in the Sahara desert and the Bambuk goldfields to the South. Therefore, before the introduction of the Camel, they traded grain for Salt and during the 8th and 9th century, after the introduction of the camel, North African Arabs became directly involved and North African access to the Gold in West Africa widened. The Soninke acted as middlemen by passing salt from the Taghaza mine to the Bambuk in exchange for Gold. The Soninke then sold this Gold to Muslim traders in the Capital, Kumbi-Saleh, in exchange for salt, clothing and other imports from Maghrib. The key to what led to the growth and early state formation of Ghana was the taxing of this particular trade as it allowed the Kings of Ghana to obtain vast amounts of wealth. For example, the King taxed one dinar of Gold for each load of Salt imported into the Kingdom and two dinars on Salt re-exported to the Goldfields of the South.[3] Therefore, expansion of the trans-Saharan trade in Gold was paralleled by the growth in the state of Ghana because of the wealth achieved by such high levels of control over this particular trade. Linked to the expansion of the Gold trade is the spread of Islam that accompanied this trade. ...read more.

It was these chiefdoms that expressed a natural ability of iron-working farmers to form larger, settled communities. As the Sahara became drier, farming technology had to be improved. Therefore, the ancestors of the Soninke developed these new techniques and the farmers of the Western Sahel made use of the new iron technology, for example, iron swords and spears. Consequently, the formation of the state of Ghana arose out of the Soninke using more superior iron weaponry to seize more farming and grazing land from their weaker, less organised neighbours.[6] This essay has focussed on four key factors in the formation of the state. Much of the focus of these factors has been placed on Ghana and this is because out of all the early Iron Age states of West Africa, we know most about Ghana as it was most involved in the trans-Saharan gold trade and so Arabic speakers who visited it were able to write about it. After discussing the four factors, the argument that farming and technology was by far the most significant contributing factor to state formation still holds true. This is because although the expansion of the gold trade enabled Ghana to grow rich, it was the access to new technology and more superior iron weaponry that contributed to an infrastructure that was essential in not only forming but maintaining the prosperous Ghanaian state of West Africa. ...read more.