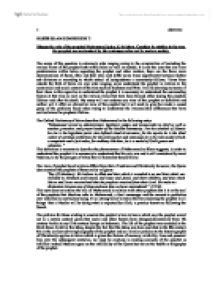 Discuss the role of the prophet Muhammad (p.b.u.h.) in Islam. Consider in relation to the way the prophet was understood by his contemporaries and in modern society.

RL3028 ISLAM COMPONENT 2 Discuss the role of the prophet Muhammad (p.b.u.h.) in Islam. Consider in relation to the way the prophet was understood by his contemporaries and in modern society. The scope of this question is extremely wide ranging owing to the complexities of including the various views of the prophet both within Islam as well as outside. It is not the case that one view predominates within Islam regarding the prophet and other matters, there are the three main denominations of Sunni, Shia and Sufi who each differ some times significantly between further sub divisions or according to which school of jurisprudence a community follows. Views from outside the faith of Islam are also wide ranging, some understand the prophet in relation to the economical and social context of the time such as Rodinson and Watt. I will be drawing out some of their ideas in this regard as to understand the prophet it is necessary to understand the surrounding factors at that time as well as the various views that have been formed either during the prophets lifetime and after his death. My essay will not endorse one view of the prophet as definitive and neither will it offer an alternative view of the prophet but it will seek to give the reader a sound grasp of the problems faced when trying to understand the irreconcilable differences that have evolved since the prophets lifetime. ...read more.

Shia views of the prophet stress Ismah the doctrine of sinlessness using the following ayat: (Satan): "O my Lord! because Thou hast put me in the wrong, I will make (wrong) fair- seeming to them on the earth, and I will put them all in the wrong,- Except Thy servants among them, sincere and purified (by Thy Grace)." (15:39-40) The Shia believe that 14 persons, the prophet, Fatima and 12 descendants from Fatima are protected by the Grace of Allah mentioned in this ayat from being tempted into sin. The role of the prophet naturally arises out of the nature of the prophet which we have covered, in the early days of the umma, legal matters and disputes where decided by Muhammad and all through the subsequent years, Muslims of all jurisprudence schools accept the decisions of Muhammad on a point of law as superceeding any other human opinion. The greatest difficulties facing Muslims in this time and especially in the west are raised from the enormous differences in culture and mores between modern times and 7th century Arabia. An often miss represented issue in the prophets behaviour is that regarding marriage. When Muhammad married Aisha she was 6 or 7 years old and the marriage was consummated sexually when she was aged 9 and the prophet aged 53, as Martin Forward notes: "Modern readers may find this story poignant or even repugnant, though neither Aisha nor other contemporaries found it so " ( Forward,1997) ...read more.

Rahman and other modern scholars of Islam only disagree with the fundamentalists in that they don't wish to recreate the social contexts and other factors of the 7th century in order to make the traditional jurisprudence fit contemporary society once more. In conclusion it has been the purpose of this essay to show how it is impossible to reconcile the enormous divergence that exists within the contemporary umma as well as the western responses to the role of the prophet. In order to reconcile the divergent views, the first pre requisite would be a return to the social context of the 7th century which would make those issues of Islamic law that are problematic in the face of the modern west no longer problematic, this was attempted in Afghanistan under the Taliban but never fully achieved. The folly in such an attempt is that it reduces the dynamic of Islam in relation to the rest of the world to earlier, bloodier conflicts such as the Sunni Shia divide that erupted again so violently in Iraq over recent years. Disagreement on the nature of the prophet and on what he said and did has been a part of the umma of Islam for the entirety of its existence and is bound to continue but I would suggest in closing this essay that increasing violence in the face of differences does not mean a return to a previous social atmosphere is either the answer or the problem. ...read more.