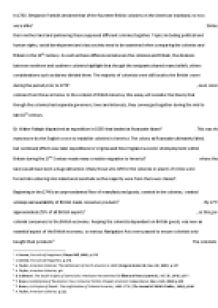 'Divergence or Convergence?' Were the British American colonies becoming more like or less like Britain and each other in the eighteenth century?

﻿In 1760, Benjamin Franklin declared that of the fourteen British colonies on the American mainland, no two were alike[1]. Sixteen years later the Declaration of Independence was signed separating these colonies from their mother land and partnering these supposed different colonies together. Topics including political and human rights, social development and class society need to be examined when comparing the colonies and Britain in the 18th Century. As well as these differences between the colonies and Britain, the divisions between northern and southern colonies highlight that though the emigrants shared many beliefs, others considerations such as slavery divided them. The majority of colonists were still loyal to the British crown during the period prior to 1776[2], even considering the differences between those British subjects in the colonies from those at home. In the context of British America, this essay will consider the theory that though the colonies had separate governors, laws and interests, they converged together during the mid to late 18th century. Sir Walter Ralegh dispatched an expedition in 1585 that landed at Roanoake Island[3]. This was the first manoeuvre by the English crown to establish colonies in America. The colony at Roanoake ultimately failed, but continued efforts saw later expeditions to Virginia and New England succeed. ...read more.

The puritans moved away from their community and traditionalism towards a more individual and modern outlook[12] just like those back in Britain and in the other colonies. By the mid-18th century, the colonists in the south had become the wealthiest in America. Residents of Charleston, South Carolina were earning four times more, per capita, than the tobacco farmers of Virginia, and six times the amount of those in New York and Philadelphia[13]. These white settlers accumulated considerable wealth, and the richest of these were able to live a luxurious, almost anglicised lifestyle. English style mansions were built and in urban centres such as Charleston and Savannah, and cultural institutions such as libraries, theatres and race courses usually seen only within the empire back home in Britain, were also erected[14]. The social development of those in the colonies, from north to south, led to a convergence of the differing colonies and closer to the British experience throughout the British Atlantic world. This development was not immediately brought with the original immigrants but was the result of the exploitation of the economic realities of their new environment. Tenant farmers back in Britain where dependent on the state, whereas in the colonies most free men had conditions which permitted them to employ themselves and their families[15]. ...read more.

The fear of increasing British governance in America threated that freedom. The development of an American social society eventually led them believe that they had to fight for their own independence, and with the empire unwilling to let these colonists who routinely ignored imperial regulations[22] drift from their control, conflict was surely and shortly on the horizon. Considering the evidence presented, it can be concluded that not only did 18th century British American society converged both together as colonies, but also became more like the mother nation than at any time since the colonies were established. Conversely this want for the luxuries and political equality of those back in Britain, combined a new found independent lifestyle, led the colonists to want for the best of both worlds, and it was this which would ultimately separate them from Britain. The fear of an aristocratic upper class found in Britain and a racial divide between white and black saw the colonial elite, surrender more social equality and political freedom to the land owners of the American seaboard. The wider implication of the convergence of the two regions was that the colonist did not feel inferior to those in Britain, and indeed now wanted for more. Lack of representation at Westminster, and being required to pay taxes to a parliament where no colonist had a seat would very quickly fuel an independence movement that would create a war and ultimately the separation of the two regions. ...read more.