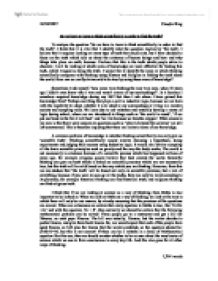 Do we have to learn to think scientifically in order to find the truth?

Do we have to learn to think scientifically in order to find the truth?

To analyze the question “do we have to learn to think scientifically in order to find the truth”, I think that it is vital that I identify what the question implies by ‘the truth’. I believe that it requires looking at every type of truth that could exist, but I have decided to focus on the truth which tells us about the existence of human beings and how and why things take place on earth, because I believe that this is the truth which people strive to discover. I will be looking at which areas of knowledge are more effective for finding this truth, which I regard as being the truth. I would like to identify the ways in which thinking scientifically compares with thinking using History and Religion in finding the truth about the world. How can we verify claims said to be true by using these areas of knowledge?

Sometimes I ask myself, ‘how come I am thinking the way I am now, when 16 years ago I didn’t even know who I was and wasn’t aware of my surroundings?’. Is it because I somehow acquired knowledge during my life? But then I ask where I have gained this knowledge from? Perhaps one thing that plays a part is inductive logic, because we are born with the capability to adapt, whether it is to adapt to our surroundings or living in a modern society and accepting rules. We learn due to our mistakes and naturally develop a sense of logic during school, where we are introduced to things such as ‘the world is round’, ‘if we put our hand in the fire it will hurt’ and ‘we live because we breathe oxygen’. What occurs to me now is that there were answers to questions such as ‘what is beyond the universe’ are still left unanswered. This is therefore implying that there are limits to some of our knowledge.

A common problem of knowledge is whether thinking scientifically can only give us ‘scientific truth’. Thinking scientifically would involve choosing a hypothesis, doing experiments and judging their success using deductive logic. It would also involve accepting all the basic scientific principles such as gravity and the way the body works. The world is not necessarily in existence because of a scientific process which has happened millions of years ago, for example religious people believe that God created the world. Scientific thinking can give us truth which is based on scientific premises which are not necessarily true, but this truth will be valid based on the way which you are thinking. However, from this we can deduce that ‘the truth’ will be based not only on scientific premises, but a mix of everything, because if you were to sum up all the truths, they can only be valid according to its premises; for example historical thinking can find historical truth, and religious thinking can find religious truth.

I think that if we are looking at science as a way of thinking, then Maths is also important to be looked at. When we look at Maths as a way of thinking, we look at the way in which there will only be one answer, by already assuming that the premises of the questions are correct. When we as humans are certain that every equation in Maths is true, like ‘2x+2x =4x’ and with the equation ‘4x = 8’, then normally we should be certain that the following mathematical problem can be solved: Three people go to a restaurant and get a bill for 30euros, so each pays 10euros. The bill was actually, 25euros, but the waiter decides to pocket 2euros, and give them back 3euros. So, we would expect that each of the people have spent 9euros, so 3x9 plus the 2euros that the waiter pocketed; so the equation should be: (3x9)+2=30, but this is not correct! If there can be a mistake in a basic of Mathematical equation like this one, then we should wonder whether to be so sure about the very basics of science which we use to form conclusions in every day life. And this also goes for all other ways of thinking.

I would say that history is the reason for the evolution of mankind as well as a way to help us to think, which means that it is playing a part in bringing us closer to the truth, because if we could reach a truth, it would just be a matter or time and development before we get a real grip on it. Thinking using History is very similar to thinking inductively, because we are using cases which have happened in the past and when they come up again, we are coming up with a decision on what to do depending on the consequences of having done that the last time. For example, I am certain that airports in America are going to make sure that there is ‘no possible way’ for any sort of weapons to be let on the plane because when they weren’t so strict about checking thoroughly under peoples shoes, on September 11th 2001 thousands of people died. History is very similar to religion in the way that our ideas on the creation of the earth are based on information which dates back thousands of years ago. Historical thinking is needed for both scientific and religious thinking to take place in the first place.

Thinking religiously will give us just as valid answers relating to the creation of the earth as scientific thinking would. However, a problem often encountered is that there has been no new evidence lately which can back up any religious claims of truth, whereas scientific claims are been reasserted every day. I think that all three put together, science, history and religion as ways of thinking will be more effective in finding the truth because it would probably be less bias than only one of those ways of thinking on its own would be. Each of these ways of thinking have already come up with their own version of things, so keeping in mind that there is no way of finding the absolute truth (because even if we did find it, there would be nothing to back it up), I think that it is not possible to answer the question thoroughly, because each of there three ways of thinking are just as close to ‘the truth’ as each other.

A mix of thinking scientifically, historically and religiously can produce probably the closest to truth you can get, such as ‘the sun will rise tomorrow’ and ‘every human will die someday’. Scientists have proven that the earth orbits around the sun and that the organs of the human body are not capable of lasting eternally; History has proven that since we can remember, the sun has always risen and no humans have never not died; the bible states that God put the sun there and made it orbit and made humans mortal because Eve took a bite out of the apple. However, if for some reason the sun is destroyed or a new way of preserving life is discovered, then this cant be the absolute truth. From this I can come to the conclusion that any claim that is eternal and doesn’t have a time limit can never be true, because we don’t know what will take place between now and eternity.

It is clear that all History, Religion and Science play an important part in finding absolute truth, although there is no way of justifying the claims made by these different areas. I believe that as people grow up, they adapt to their own way of thinking which allows them to find their own truth, some perhaps more scientifically valid than others, but one important thing that I have come to realize, is that nothing has ever said that there has to be reason for everything; for all we know everything could just happen for no reason. So, although thinking scientifically seems to be the most solid knowledge, ‘the truth’ could be the opposite to all that science claims, because the truth has no limits, whereas Science, History and Religion do.