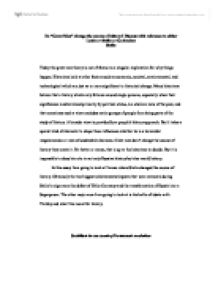 Do Great Men change the course of history? Discuss with reference to either Lenin or Stalin or Gorbachev

Do "Great Men" change the course of history? Discuss with reference to either Lenin or Stalin or Gorbachev Stalin Today the great man theory is out of favour as a singular explanation for why things happen. Historians look at other factors such as economic, societal, environmental, and technological which are just as or more significant to historical change. Many historians believe that a history which only follows around single persons, especially when their significance is determined primarily by political status, is a shallow view of the past, and that sometimes such a view excludes entire groups of people from being parts of the study of history. A broader view is provided by a people's history approach. But it takes a special kind of character to shape these influences whether he is a homicidal megalomaniac or men of undeniable charisma. Great men don't change the course of history they create it. For better or worse, that is up to the historians to decide. But it is impossible to deny his role in not only Russian history but also world history. In this essay I am going to look at 3 areas where Stalin changed the course of history. Obviously the two biggest achievements/impacts that were overseen during Stalin's reign were the defeat of Hitler Germany and the transformation of Russia into a Superpower. ...read more.

the centre of this modernizing effort, because that alone could guarentee the needs of military defence and from heavy industry the rest of the economy would benefit eventually.4 Stalin replaced the New Economic Policy (NEP) of the 1920s with Five-Year Plans in 1928 and collective farming at roughly the same time. The Soviet Union was transformed from a predominantly peasant society to a major world industrial power by the end of the 1930s. What cannot be be doubted however, is that during the first 5 year plan, considerable growth was in fact achieved in key sectors of heavy industry, especially the output of machine tools, and the foundation was laid for the creation of whole new industrial areas.Especially notable was the rapid construction of giant hydroeletric scheme on the dniper, which attracted a cluster of factories. Iron and steel rose from 3.5 million tonnes in 1928 to 10 million by 1933.5Coal, the integral product fueling modern economies and Stalinist industrialization, successfully rose from 35.4 million to 64 million tons, and output of iron ore rose from 5.7 million to 19 million tons. During the second five-year plan (1933-37), on the basis of the huge investment during the first plan, industry expanded extremely rapidly. By 1937 coal output was 127 million tons, pig iron 14.5 million tons, and there had been very rapid developments in the armaments industry, as a result of the growing threat from Germany and Japan. ...read more.

The biggest blow for the Nazis would come at Stalingrad the bloodiest battle of the war. It was very much urban warfare with fighting in houses and factories. By 19th November Germany seemed to have control of most of the city. Stalin's last great act of the war was to plan the counter attack. Stalin's idea of the counter-offensive was based on the same psychological premises and the same insight into Hitler's mentality that underlay the scheme for the battle of Moscow. He banked on Hitler's blind9 arrogance. Under the command of Zhukov the Russians drove the Germans back and Stalin now rose to almost titanic stature in the world. Conclusion How then are we to judge Stalin? Looking at him purely from a historical and a narcissistic point of view he was definitely one of if not the key person in 20th century history. . Born in obscurity, he rose to historic significance, a fallible human being of extraordinary qualities. He supervised the near-chaotic transformation of peasant Eurasia into an urban, industrialised superpower under unprecedented adversities. Though his achievements were at the cost of exorbitant sacrifice of human beings and natural resources, they were on a scale commensurate with the cruelty of two world wars. 1 Chris ward Stalins Russia pg23 2 www.janus.umd.edu/issues/sp07/Szpakowski_SocialisminOneCountry 3 Chris ward Stalins Russia pg35 4 Geoffrey Hosking A history of the soviet union pg150 5 L.Deutscher Stalin pg324 6 L.Deutscher Stalin pg466 7 L.Deutscher Stalin pg468 8 8 L.Deutscher Stalin pg468 9 L.Deutscher Stalin pg483 ?? ?? ?? ?? ...read more.