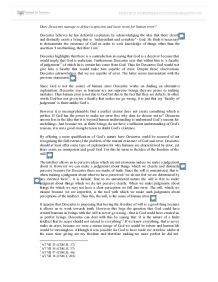 Does Descartes manage to defeat scepticism and leave room for human error?

Does Descartes manage to defeat scepticism and leave room for human error? Descartes believes he has defeated scepticism by acknowledging the idea that there clearly and distinctly exists a being that is 'independent and complete'1- God. He finds it necessary to demonstrate the existence of God in order to seek knowledge of things other than the assertion 'I am thinking, therefore I am'. Descartes highlights that there is a contradiction in saying that God is a deceiver because that would imply that God is malicious. Furthermore Descartes says that within him is 'a faculty of judgement'2 of which he is certain has come from God. Thus for Descartes God would not give him a faculty that would make him capable of error. Despite these observations Descartes acknowledges that we are capable of error. The latter seems inconsistent with the previous statements. Since God is not the source of human error Descartes works on finding an alternative explanation. ...read more.

Due to its unrestricted nature the will is free to make judgment about things which we do not perceive clearly. When we make judgments about things for which we may not have a clear perception we fall into error. The will, which we misuse because we are imperfect, is the tool with which we make such judgments about perceptions of the intellect. Thus this, the will, is the cause of human error. It appears that Descartes is proposing that having the freedom of will is a good thing because it allows us to work towards truth. However this begs the question that God could have created humans as beings with the will to never go wrong - that is God could have created us as perfect beings. Descartes can deal with this by saying that 'it is the nature of a finite intellect that its scope should not extend to everything'.4 If we knew everything, that is never make an error, because we were a mirror image of God we would be robots and human life would be meaningless. ...read more.

This is a good start to an essay, which cuts off abruptly before a conclusion has been reached. The writing is lucid and quickly reaches the point. Presentation of Descartes' views is mostly accurate and some fair evaluation of these views is offered. As it stands, much of the essay doesn't really address the question. If the essay were to continue like this to present a basic conclusion as to whether, on balance, Descartes' arguments are successful, it would be deserving of a moderately good mark.