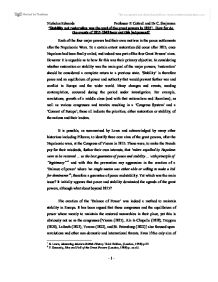 Each of the four major powers had their own motives in the peace settlements after the Napoleonic Wars.

Each of the four major powers had their own motives in the peace settlements after the Napoleonic Wars. To a certain extent restoration did occur after 1815, once Napoleon had been finally exiled, and indeed was part of the four Great Powers' aims. However it is arguable as to how far this was their primary objective. In considering whether restoration or stability was the main goal of the major powers, 'restoration' should be considered a complete return to a previous state. 'Stability' is therefore peace and an equilibrium of power and authority that would prevent further war and conflict in Europe and the wider world. Many changes and events, needing contemplation, occurred during the period under investigation. For example, revolutions, growth of a middle class (and with that nationalism and liberalism), as well as various congresses and treaties resulting in a 'Congress System' and a 'Concert of Europe'; these all indicate the priorities, either restoration or stability, of the nations and their leaders. It is possible, as summarised by Lowe and acknowledged by many other historians including Pilbeam, to identify three core aims of the great powers, after the Napoleonic wars, at the Congress of Vienna in 1815. These were, to make the French pay for their misdeeds, further their own interests, that 'rulers expelled by Napoleon were to be restored ... ...read more.

was the main aim of the great powers as: 'The Allied governments were in accord that it should be a monarch [that replaced Napoleon], but the return of the Bourbons was far from clear-cut'11. Indeed the Comte de Provence was moderate and 'seemed to offer some guarantees [to maintain stability], but his heir ... was a strident anti-revolutionary ultra-royalist...'12. Indeed, the Comte de Provence was restored to be the monarch, however, differing from pre-war France, with a constitution as '...the returning Louis XVIII had agreed to a constitutional form of rule ...the Charter...'13. Therefore this was 'not a restoration'14 and '...deposed monarchs were only restored where convenient for the Allies'15. The only real autocratic restoration took place in Austria16. It has been argued that the restoration of territory to the pre-1789 arrangement was impossible, yet this is not so. It wasn't impossible to restore the borders of 1789, yet to re-establish the borders and maintain peace and stability, however, was impossible because '...territories ...were added to restored states in order to preserve the balance of power and to build up a strong defence...'17, even if this balance of power and defence did not later occur, as so in Italy18. Indeed 'We speak of a 'restored' Europe, but this was barely perceptible on a map' as it was 'reconstructed'19 and 'Above all, there was no attempt to restore the Holy Roman Empire'20. ...read more.

However this partial return to 1789 Europe, in itself, does not indicate that restoration was not the key aim of the Great Powers as they may have merely not achieved it. Yet still, the evidence indicates that with, many territorial borders changed, the existence of constitutions and 'legitimacy' (in the place of divine right), and the suppression of revolutions, threats and opposition to order, that restoration could not have been the main aim of the major nations. The sheer number of treaties and the organisation of the 'Concert of Europe' and the 'States System' stand alone to indicate the great powers' eagerness to co-operate, discuss and maintain peace and stability. Restoration was undoubtedly desired, yet simply as a tool for maintaining stability and as there was little alternative: 'rulers expelled by Napoleon were to be restored ... as the best guarantee of peace and stability ...'34. Indeed 'The prime concerns of government in the post-1815 decades were with domestic stability...'35 and threats to this stability, revolutions and new ideologies, were indeed dealt with. While monarchs were indeed restored, they were restored to altered thrones, realms and subjects. Therefore restoration of dynasties did occur, yet only if it would result in adding to the stability, and the maintaining of a 'Balance of Power' in Europe. Therefore the events of 1815 to 1848 do undeniably bear out the judgement: 'Stability not restoration was the goal of the great powers in 1815'. ...read more.