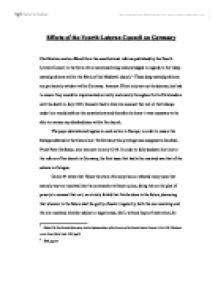 Effects of the Fourth Lateran Council on Germany. The pope administered legates to each nation in Europe, in order to ensure the bishops adhered to the Canon law.[2] In Germany this privilege was assigned to Cardinal-Priest Peter De Sasso, who was sent in

Effects of the Fourth Lateran Council on Germany

Clarification can be offered from the constitutional reforms published by the Fourth Lateran Council in the form of an awareness being acknowledged in regards to the ‘deep-seated problems within the fabric of the Medieval church.’[1] These deep-seated problems are particularly evident within Germany. Innocent III not only set out the decrees, but had to ensure they would be implemented correctly and evenly throughout Latin Christendom until his death in July 1216. Innocent had to take into account that not all the bishops under him would enforce the constitutions and therefore he knew it was necessary to be able to oversee any disobedience within the church.

The pope administered legates to each nation in Europe, in order to ensure the bishops adhered to the Canon law.[2] In Germany this privilege was assigned to Cardinal-Priest Peter De Sasso, who was sent in early 1216. In order to fully dedicate his time to the reform of the church in Germany, the first issue that had to be resolved was that of the schism in Cologne.

Canon 64 states that ‘Since the stain of simony has so infected many nuns that scarcely any are received into the community without a price, doing this on the plea of poverty to conceal that evil, we strictly forbid that this be done in the future, decreeing that whoever in the future shall be guilty of such irregularity, both the one receiving and the one received, whether subject or superioress, shall, without hope of restoration, be removed from their monastery to one of stricter observance to do penance for the remainder of their life.’[3]

The problem that is being eradicated from church life via this constitution is that of simony, which is the sin of buying of buying or selling ecclesiastical preferments or benefices and making a profit out of anything sacred. What C. 64 is dealing with is roles within the church being offered at a price, and states that both the receiver and the received will be removed. It also states that if simony had taken place before the decrees were incorporated, then the bishop who had taken the payment should be moved to a different section of the same order. This decree, along with C. 63, 65 and 66, dealt with the various different types of simony that took place within the church.

An example of simony in Germany was brought to light before the Fourth Lateran Council in April 1212, Innocent III requested that the senior dignitaries of the church in Münster inquire into the actions of a canon at Bonn, believed to be Henry of Müllenhark. It appears he was acquitted as he remained in his position as the provost of Bonn until 1225. This documented record of simoniacal activity is notable as it offers insight into why it had to be addressed as an issues within Germany.[4]

Canon 64 was taken seriously and was enforced  through many different mediums during the Thirteenth Century, although as with some of the other canons of the council it was not implemented and adhered to by the same standards as intended by its creators.[5]The progress that was made regarding attempts to eradicate simony from the German episcopacy is made clear by the actions previously stated. However there were still instances of such crimes within the regions after these efforts had been made. A example that illustrates this took place on 22nd of November 1226 when Pope Honorius III gave instructions to the Archbishop of Bremen to act upon the decrees laid out by the 1215 Council to discipline Canons from Bremen as well as the former provost of Reepsholt for simony among other infractions.[6]

The importance of the Concilium Germanicum is also significant in regards to simony and also the implementation of the Fourth Lateran Council in general. Concilium Germanicum, which took place in 1225,[7] brought bishops together from all over Germany and demanded an improvement in regards to discipline within the Church and a direct result of this synod was the confrontation of the incident involving  the canons of Bremen within a year of the gathering.

The Concilium Germanicum is valuable in regards to ‘The Great Council’ because it reinvigorated Innocents ideologies for the Catholic religion. Innocents spirit and values were channelled through the intentions of Conrad of Porto.[8] Conrad had been made the Crusade preacher in Germany in 1224.[9] Conrad is important in regards to the Council because he had an excellent background in regards to the German church and knew what changes needed to be implemented. Conrad had ‘been elected by a faction of the cathedral chapter at Liège to be bishop in 1200, before withdrawing to the life of a Cistercian monk at Villers-en-Brabant. By 1209 he was prior of that house; in 1211 he was elected abbot. His reputation as an ardent reformer and as a rigorous administrator led to his elevation as abbot of Claivaux in 1214, and in 1216 he became abbot of Cîteaux and general of his Order’[10].

These standards in regards to simony in Germany appear to slip as time passes and the church advances. This is shown by another incident. As previously mentioned punishments for the offences set out at the Twelfth ecumenical Council were not as severe as intended by their creators, however during January 1235 this reached a new level of leniency.  The problem that had arisen was that members of Archbishop Siegfried’s diocese had become part of the congregation by offering money in return. These men were not punished in the way that had been set out by Pope Innocent III, Siegfried III was given special dispensation to pardon his conventuals.[11] This event is significant in regards to the question at had as it offers an example of the problems within in the German church that had to be faced up to.

The implementation of Canon 21 of the Fourth Council of the Lateran is potentially the most significant factor of this investigation. Canon 21 is by far the most famous of the decrees set out at the ecumenical council and changed Ecclesiastical history. This famed decree is the Omnis utriusque sexus and it stated that everyone of the faith that  was above the age of reason must confess their sins on annual basis.[12] In Germany the first instance of this canon being put into practice was by Hugh of Liège, who was present at the council. Hugh returned to his diocese in 1217 following his completion of a pilgrimage to St James’ shrine after the Lateran council had convened. He had been given a copy of the decrees and announced them to his clergy at a synod believed to be in the middle of summer. At the synod Hugh stated the intentions of Canon 21 and also that children had to be confirmed when, or after they had reached the age of seven. His age was raised to 12 in 1288. By publicly announcing all the decrees of the Council, it is clear that within this diocese it would be followed precisely as intended and the fact that they were not implemented gradually is also shown.[13]

Another significant moment in ecclesiastical history that took place in Germany and is integral to the question at hand was in Würzberg in February 1231. During this time a synod was convened which allowed Dominicans to have the authority to be propius sacerdos to a certain delegation within Würzberg. In addition to clarifying Dominicans position in regards to confession, and emphasizing the importance of annual confession and Canon 21 of the council, the synod also made clear their role in regard to burials and preaching.

This section of the chapter looks at  the Canons that deal with the Jewish faith. Canons 67, 68, 69, 70[14] are all basically anti-Semitic religious laws and as Binns’ states in his biography of Innocent III “The effect of these decrees was probably to arouse fresh feeling against Jews or perhaps rather to put in to shape a revived antagonism[15]” As well as this the decrees again echo the significance of the Fourth Lateran Council and its influence on history. The council not only followed but also set a new precedent for treatment towards the Jews. The influence of these documents is also exemplified by the fact that the canons, particularly C.68, were used as a model for Adolf Hitler’s Nuremburg laws of 1935 , even though that was an attack on the Jewish as a race, whereas the councils attack was aimed at their faith.

Due to the manner of these decrees, it would not be necessary to document all the issues with the Jews in Germany. This is because the incorporation of the laws that incite prejudice towards the Jews in the Thirteenth Century would be fairly straight forward, an example of this is given by Schroeder in his summary of Canon 68 when it states ‘Jews and Saracens of both sexes in every Christian province must be distinguished from the Christians by a difference of dress. On Passion Sunday and the last three days of Holy Week they may not appear in public.’[16]

There are however some sources that offer invaluable insight into how these decrees were integrated throughout the Century. The event took place at a synod in Cologne in 1220, it looks at Canon 70, which states ‘Jews who have received baptism are to be restrained by the prelates from returning to their former rite’[17]. The issue at the synod was that Hugh of Liège demanded a young Jewess, who had converted to Christianity, should be brought to him and returned to her Jewish parents. This would however directly contradict Canon 70, therefore Archbishop Engelbert III instructed Hugh to leave the issue alone. [18] As a primary source this is integral in illustrating how the decrees set out by Innocent III were implemented by diocese when they were needed rather than as a set of rule to be followed by the whole Church from 1215 onwards.