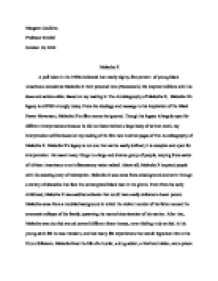 Margaret Caulkins Professor Strobel October 10, 2010 Malcolm X A poll taken in the 1990s indicated that nearly eighty-five percent of young black Americans considered Malcolm X their personal hero (Newsweek). He inspired millions with his ideas and actions alike. Based on my reading in The Autobiography of Malcolm X, Malcolm X's legacy is still felt strongly today. From his ideology and message to his inspiration of the Black Power Movement, Malcolm X's effect cannot be ignored. Though his legacy is largely open for different interpretations because he did not leave behind a large body of written work, my interpretation will be based on my reading of the first two hundred pages of The Autobiography of Malcolm X. Malcolm X's legacy is not one that can be easily defined; it is complex and open for interpretation. He meant many things to a large and diverse group of people, varying from savior of African Americans to an inflammatory racist radical. Above all, Malcolm X inspired people with his amazing story of redemption. Malcolm X was came from a background and went through a variety of obstacles that face the stereotypical black man in the ghetto. ...read more.

, were considered too slow or ineffectual for these people, who felt that the change they strove for would never come. Malcolm's more radical beliefs, such as mass black relocation to Africa, appealed to these people. Malcolm X's message of white moral inferiority seemed plausible when looking around at a segregated and cruelly racist world. Malcolm preached the need for black autonomy and separation from the America's social and political mainstream. He implied that white Americans and the decadent mores of their western society caused the high crime rate in black communities, with the blacks there striving for the unattainable goal of being white. Malcolm urged black Americans to strike out and take control from their white oppressors. He told black Americans that they let the whites push them around and ruin their lives. He said "someone must be the boss. if it's even just one person, you've got to be the boss of yourself." (Haley, 164) Malcolm believed that white Americans oppressed blacks, blamed and criticized the blacks for their problems, and then refused to help try to fix the problems. He said that he had "no mercy or compassion in me for a society that will crush people, and then penalize them for not being able to stand up under the weight." ...read more.

(Enisuoh) I personally do not believe that the Black Power movement could have been as successful as it was without the rhetoric and presence of Malcolm X. Malcolm X's inflammatory ideas and manner of speaking translated into the activism of the next generation of civil rights activists, especially in the Black Panther and Black Power movements. If Malcolm had one, lasting message for us today, it would be that blackness does not indicate inferiority. Throughout his life he strove to stress this point to black Americans. He did not want black people to feel that they had to deny any part of themselves; he wanted them to embrace the parts of them that tied them to their African roots. Though his actions and ideas did help form his legacy, he stood for more than that. He stood for Black Power, black independence after centuries of dependence, and loving oneself. Malcolm looked to the self-loathing black man in the ghetto and showed him that he should be proud. He saved generations of black Americans from growing up ashamed or unaware of their race and heritage. For these and many other reasons, Malcolm X and his legacy will never be forgotten. ...read more.