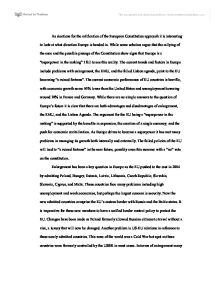 As elections for the ratification of the European Constitution approach it is interesting to look at what direction Europe is headed in. While some scholars argue that the rallying of the euro and the possible passage of the Constitution show signs that Europe is a "superpower in the making" I fail to see this reality. The current trends and factors in Europe include problems with enlargement, the EMU, and the failed Lisbon agenda, point to the EU becoming "a ruined fortress". The current economic performance of EU countries is horrific, with economic growth some 50% lower than the United States and unemployment hovering around 10% in France and Germany. While there are no simple answers to the question of Europe's future it is clear that there are both advantages and disadvantages of enlargement, the EMU, and the Lisbon Agenda. The argument for the EU being a "superpower in the making" is supported by the benefits in expansion, the creation of a single currency, and the push for economic revitalization. As Europe drives to become a superpower it has met many problems in managing its growth both internally and externally. The failed policies of the EU will lead to "a ruined fortress" in the near future, possibly even this summer with a "no" vote on the constitution. ...read more.

The fact that six years after the implementation of the euro the economies of Europe have lagged behind the United States shows the bankruptcy of the EMU. There have been conflicts over the implementation and economic policies that show when pressed countries will revert to protect the nation-state, "The conflicts over the Stability and Growth Pact are the inevitable result of a monetary union bereft of strong federal institutions and social solidarity"5 . The EMU is a construction that does not have the backing of all EU members, as the pressure is not there on members to follow the spirit of these treaties. Citizens have allegiances to their countries before the EU and if the trust is there they will not pressure politicians to abide by Brussels rules. The examples of France and Germany violating the Stability and Growth Pact are the most glaring, "the stability and growth pact pledges members of the single currency not to run budget deficits of more than 3% of GDP, a commitment that is again enshrined unchanged in the constitution. Yet France and Germany are on course to violate the ceilings for four years in a row, and seem happy to continue doing so"6. ...read more.