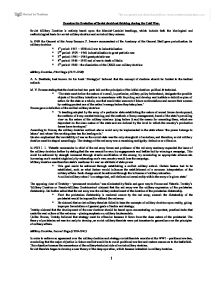 Examine the Evolution of Soviet doctrinal thinking during the Cold War.

Examine the Evolution of Soviet doctrinal thinking during the Cold War. Soviet Military Doctrine is entirely based upon the Marxist-Leninist teachings, which include both the ideological and methodological basis for soviet military doctrine and soviet military science. In 1969 the General of the Army Semyon P. Ivanov commandant of the Academy of the General Staff gave periodization for military doctrine: * 1st period: 1917 - 1928 civil war to Industrialization * 2nd period: 1929 - 1941 industrialization to great patriotic war * 3rd period: 1941 - 1945 great patriotic war * 4th period: 1946 - 1953 end of war to death of Stalin * 5th period: 1960 - the dissolution of the USSR new military doctrine Military Doctrine, First Stage (1917-1928) A. A. Svethcin, best known for his book 'Strategiya' believed that the concept of doctrine should be limited to the tactical outlook. M. V. Frunze stating that the doctrine had two parts laid out the principals of the initial doctrine: political & technical. * 'The state must define the nature of overall, in particular, military policy beforehand, designate the possible objects of its military intentions in accordance with its policy, and develop and institute a definitive plan of action for the state as a whole, one that would take account of future confrontations and ensure their success by making prudent use of the nation's energy before they take place.' Frunze gave a definition of the unified military doctrine: * 'A teaching adopted by the army of a particular state establishing the nature of armed forces development, the methods of troop combat training, and the methods of troop management, based of the state's prevailing view on the nature of the military missions lying before it and the means for executing them, which are dependant on the class nature of the state and are defined by the level to which the country's productive forces have developed.' ...read more.

It was Marshal G.K. Zhukov who pressed for implementing the term, with all subsequent theoretical implications: * 'In restructuring soviet armed forces, we proceed from the fact that the methods and forms of future war will be different from all past wars in many ways. Future war will be characterized by the mass use of air forces, rocket weapons, and means of mass destruction such as atomic weapons. However, we proceed from the fact that the latest weapons, including weapons of mass destruction, do not reduce the decisive role of the ground armies, navies and aviation. Without strong ground forces, without strategic, long-range and frontal aviation and modern naval fleet, without well-organized co-operation between them, modern war cannot be waged' The Revolution in Military Affairs - according to soviet writings after the event, a revolution in military affairs took place in the soviet armed forces between 1953 and 1960 affecting all facets of the military. It continued until the end of the cold war until Gorbachev's introduction of perestroika. * Karl Marx's collaborator Friedrich Engels to describe the introduction of gunpowder used the term revolution in military affairs. The revolution in military affairs was mainly promoted by Marshal V.D. Sokolovsky. He was also the prime mover of bringing the USSR into the nuclear age and thus responsible for setting the stage for the next formulation of military doctrine. As a result of all the deliberations, a new military doctrine was formed. This new objective - development of new military concepts was the result of a directive from the Minister of Defense as well as of a military-science conference held in May 1957. Discussions on the role of nuclear weapons were conducted widely, both in military schools and in the field. A great number of papers were produced by prominent generals, admirals and officers on conducting nuclear war, especially on the beginning of such a war. ...read more.

the book does not directly deal with military doctrine, but rather with its implementation: 'military strategy occupies a subordinate position in regard to military doctrine. The latter determined the overall policy in principle, while military strategy, starting from this overall policy, develops and investigates concrete problems upon the nature of future war, the preparation of the country for war, the organization of the armed forces and the methods of conducting the war.' However, what is important is that there is not always a clear distinction between writings on military strategy and military doctrine. In certain cases military doctrine is called military science. What stand out in the evolution of the soviet doctrinal thinking is the repetition of the same concepts and ideas. Overall, however, Sokolovsky outlines the features generally found in the military doctrine: * Exclusion of inevitability of war, but not the exclusion of its possibility * The struggle for peace of the entire socialist camp * The unresolved economic and political contradictions of imperialism * The class struggle throughout the world * The aggressive course of the politics of world reaction - US monopolists * The intensified preparation for war by imperialist countries Therefore, the evolution of soviet doctrinal thinking was a process of immense complications where ideology and socialist principles, as well as cult personalities played a great role. The development of the industrial base, or its vital necessity produced the concerns with the nuclear, intercontinental war and vice versa. It is therefore, vital to consider the origins of soviet strategic and military thought in relation to state's connections with the opposing world and the ability of internal integration and industrial stimulation. Finally, the doctrine, or its principles were always subjective to the overall political and economic mood of the soviet state and the directions in which the society was shifting. Thus, one should be cautious in styling the evolution of the soviet military doctrine, as the concept itself is strongly blurred by the ideological dialectics of the socialist state. 4 ...read more.