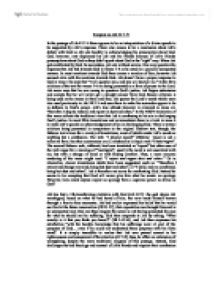 Exegesis on Job 42:1-17 In the passage of Job 42:1-6 there appears to be an interpretation of a divine speech to be supported by Jobs response.

Exegesis on Job 42:1-17 In the passage of Job 42:1-6 there appears to be an interpretation of a divine speech to be supported by Job's response. There also occurs to be a conclusion about Job's debate with God as Job acts humbly in acknowledging his presumption about God. God, however, acts displeased by Job and his friends because of Job's friends presumptions about God as they didn't speak about God in the "right" way. When Job gets confronted by God, he surrenders, yet acts without sorrow. One may question the response that Job had towards God in verses 1-6 as he acted in a peculiar unexpected manner. In most reactions towards God there comes a reaction of fear; however Job seemed calm with his reactions towards God. Job doesn't have a proper response to God in verse 4 he says that "I will question you, and you will declare me." In the form criticism of the text the verses 1-6 are being presented as a form of prayer to the Lord. Job never says that he was wrong to question God's justice. Job feigns submission and accepts that he will never get a straight answer from God. ...read more.

Therefore in this characteristic God is being both restorative and punitive; for each sin doesn't go unpunished. The men were asked to present "seven bulls and seven rams" in this concept the number seven is being used a significant amount of times in the bible. There is the rhetorical feature of the passage that what is the significance of the number seven? And what would happen if any other number was being used? These questions arise the implications of the bible and also the narrative criticism of the type of character God was, the constant use of the number seven could reveal that perhaps seven is God's "lucky number." On one hand, the phrase, "good things happen to good people and bad things happen to bad people", is completely disproved and disqualified. On the other hand, Job is not 'blasted' for questioning God; he is corrected for his presumption and arrogance in asking such questions. Our suffering does indeed lead us to question our situation, but the story of Job promotes composure in suffering as in celebration. Job is blessed after praying for his friends' forgiveness, not after his own surrender. This could simply be a matter of timing or it could be a consequence. ...read more.

Yet, God cannot be so easily understood, or manipulated. However it raises the rhetorical criticism of God's character and whether God can even make himself feel pain and suffering that he inflicts (God made us to feel pain) on human beings? God did not intend for his creation to suffer; yet, our rebellion against him places under the influence of all kinds of evil. The relational meaning of the passage is used to express the implicational measures that are associated with the suffering one undergoes and the consequences that are faced when one undermines God's righteousness. The final irony of the book of Job is that the author has used a traditional story about a holy man, a non-Israelite named Job, to explore the mystery of suffering in a very untraditional manner, suffering by his enemies. The ending of the passage ends with Job's renewed blessing, one may suggest that the ending of the new blessing of Job is the perfect ending. As a literal critic would say that it was the perfect ending to the story as "Job died old and full of days" suggesting that he was happy and fulfilled at the time of his death. However, one may question the character of Job in whether he deserved such blessing by God, as he was questioning God in the beginning of the passage. ...read more.