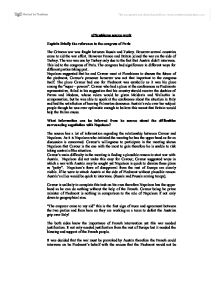 aPlombieres source work Explain Briefly the reference to the congress of Paris The Crimean war was fought between Russia and Turkey. However several countries came to aid the war effort. However France and Britain joined the war on the side of Turkey. The war was one by Turkey only due to the fact that Austria didn't intervene. This led to the congress of Paris. The congress had significance in different ways for different parties taking part. Napoleon suggested that he and Cavour meet at Plombieres to discuss the future of the piedmont, Cavour's presence however was not that important to the congress itself. The place Cavour had one for Piedmont was symbolic as it was his place among the "super - powers". Cavour who had a place at the conferences as Piedmonts representative, failed in his suggestion that his country should receive the duchies of Parma and Modena, whose rulers would be given Moldavia and Wallachia in compensation, but he was able to speak at the conference about the situation in Italy and had the satisfaction of hearing Palmerton denounce Austria's rule over her subject people though he was over optimistic enough to believe this meant that Britain would help the Italian cause. What information can be inferred from he source about the difficulties surrounding negotiation with Napoleon? The source has a lot of information regarding the relationship between Cavour and Napoleon. ...read more.

The main difficulty surrounding this discussion is that Cavour is not sure what Napoleon wants therefore he has to play by ear making him the weaker party from the beginning! How useful is the source to an understanding of Cavour's role in he process by which Italy was unified? The source is taken from a letter written to Victor Emanuel the ruler of the piedmont from Cavour, prime minister. It was written in regards to Cavour and Napoleon's (Emperor of France) meeting at Plombieres. The meeting was set - up following the congress of Paris after the Crimean war. The meeting was to discuss expansion of Piedmont into the Northern Kingdom. An agreement was reached and a treaty signed, France pledging allegiance to Piedmont in the war against Austria. The role of Cavour in the Italian unification is a great one. Even though he died before the completion he played by far the greatest role in the process. The meeting between Napoleon III and himself at Plombieres is only the end to a massive campaign to align the Piedmont with the rest of Europe. Cavour being not even the sole ruler of Piedmont has, until now, not been able to exercise his plan to "kick" Austria out of Italy. This only being due to the fact that he has not commanded a large enough force to conquer his Austrian "captors". ...read more.

This meeting was the sole effort of Cavour (on Italian side) therefore it holds him responsible for what was to follow... The war with Austria began and was ended shortly after it started due to Napoleon's fear of foreign intervention. He signed a treaty with the king of Austria (not to Cavour's knowledge), by which the war ended. This angered Cavour as he had brought the country so far. Italian states refused o accept it and revolutions began. Cavour was reinstated shortly after and encouraged states to demand plebiscites. Thus Parma, Modena, and Bologna all declared union with the Piedmont, this was commonly known as the northern kingdom. Cavour had successfully united Italy, not fully but he had completed the expansion of the Piedmont. Shortly after this he died 6th June 1861. Cavour was by far the most influential force in the Unification of Italy only helped by his allies to the extent and limits that Cavour could not reach alone. The source is a primary source as it was written at the time, it is highly likely to be accurate except for parts of the meeting Cavour did not wish for Victor Emanuel to know about. A more useful document would be a letter from the French side of the agreement or the treaty itself. Other than that the source is quite a reliable source of information, as Cavour has no need to lie to Victor Emanuel, as all he has is good news! ...read more.