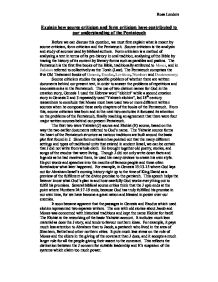 Explain how source criticism and form criticism have contributed to our understanding of the Pentateuch Before we can discuss this question, we must first explain what is meant by source criticism, form criticism and the Pentateuch. Source criticism is the analysis and study of sources used by biblical authors. Form criticism is a method of analysing a text in terms of its pre-history in oral tradition, analysing of the Bible by tracing the history of its content by literary forms such as parables and psalms. The Pentateuch is the first five books of the Bible, traditionally attributed to Moses, and in Judaism referred to collectively as the Torah (Law). The Pentateuch comprises the five Old Testament books of Genesis, Exodus, Leviticus, Numbers and Deuteronomy. Source criticism studies the specific problem of whether there are written documents behind our present text, in order to answer the problems of repetitions and inconsistencies in the Pentateuch. The use of two distinct names for God in the creation story, Genesis 1 used the Hebrew word "elohim" while a second creation story in Genesis 2 and 3 repeatedly used "Yahweh elohim", led 18th century researchers to conclude that Moses must have used two or more different written sources when he composed these early chapters of the books of the Pentateuch. ...read more.

It puts much less stress on the role of Moses and the elders in the giving of the covenant than J does, and it accepts a much larger role for all the people giving their assent to the covenant. This reflects the distinction between the J concern for suitable leadership and E's suspicion of the systems which claim too much power. The other had a priestly cast to it as it was interested in liturgical matters and therefore became known as the Priestly (P) source. The P source clearly anticipated to complement what J and E said about the historical traditions of Israel with special resources on worship, observance of the covenant in day to day life, and social structures of Israelite community. The P source was very concerned to give Israel a sense of trust in Yahweh's goodness and fidelity so that they would not lose faith in their God. P structured many details of the old tradition into new patterns that put the emphasis on continuity. Some of these were; the use of genealogies- showing the care of God over his human creatures, place names, establishing laws for future generations, emphasis on the divine presence is Israel's midst, God's word is primary and the importance of blessing. As the Book of Deuteronomy stood out with its long speeches and sermons compared to brief scenes and incidents, the fourth source was named Deuteronomist (D) ...read more.

Form critics reacted not in favour of numerous of the conclusions of the documentary thesis, pointing out that the source critics time and again unobserved the verbal poetry and the primitive forms still in attendance in the Pentateuch. Many even denied that the Elohist source ever existed as a written source due to lack of substance. In short, the form critics have opened up a possibility that everything not in the original J account was handed on piece by piece, and over the centuries these were gradually added to the J account. The century of development from source criticism through form criticism summarizes that neither stands alone, script and spoken story-telling may have been used at the same time, in addition the Bible itself records that many written sources were known in Israel. The addition of form criticism to the study of the Pentateuch has therefore prohibited us from seeing only four whole books put together so strongly that the main undertaking of Bible study is to unravel them. This may also return us to the original question- "Who really wrote the Pentateuch?". Form criticism confirms that, while the Pentateuch was not actually written down by Moses, many of its traditions, legal practices and covenant forms may actually date back to the time of Moses, and their central importance for Israel may even have originated with him or at least with the community of the exodus and conquest. ?? ?? ?? ?? Rosa Lenders ...read more.