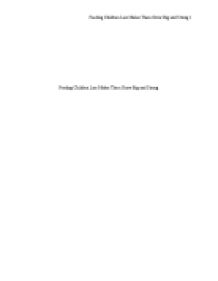 Feeding Children Lies Makes Them Grow Big and Strong- Lying to children from a young age is bad for the child's psychological growth.

After each situation, the child would be asked his moral evaluation of the situation. Different confusing situations presented themselves. For instance, if a puppet tattled on another puppet, harm would be exacted. If puppet one blamed puppet two for his own mistakes, puppet two would receive punishment when he was in the right. If puppet one accidentally did something worth a punishment, and puppet two stepped in and took the blame while enduring a punishment, what would be the moral evaluation given? Talwar?s (1955) research concluded that children?s moral evaluation of anything is determined on harm. At a young age, the view is black and white ? telling a lie is bad while being truthful is the only proper path. But as they reach an age past the Santa Lie, which is around fifth grade, their understanding of lies and truths becomes less binary. They see another dimension: consequences. Fifth grade actions such as tattling were beginning to be viewed more negatively and the consequences following a lie became more scrutinized. The older children viewed lies as something that could be considered the right choice. If a teacher is conducting a lecture when suddenly a student makes a noise, and the teacher turns around and asks who did it barring a punishment. ...read more.

(Plato, 2013) In Ross?s belief, the lie itself breaks the prima facie duties and hurts the person more than it benefits them. In Kant?s view each lie corrupts a person further. (Kant, 1871) This is seen with Victoria Talwar?s research that concluded that children?s views of lying differ as they get older. And although Plato poses an interesting view over a proper lie to tell, his views only account for a minute amount of lies. The white lies that are told to children do not constitute as noble, leading to a skewed moral compass. Lies are damaging. Lies are addicting, lies destroy you and make you less human. The little white lies that are introduced to children serve almost no purpose and only end up benefitting the parent telling the lies. Although noble lies exist and can happen, a child is not ready enough to visit the moral qualms of lying and deception from a young age. This makes the teachings of honesty important to a child?s development simply because lies grow and get stronger, and while this happens corruption grows. Lies can be hurtful, but only if the parents themselves let those lies come into fruition. Lying is an action that can and should just be stopped by parents. ...read more.