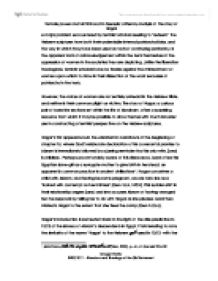 Female power and victimhood in Genesis: a literary analysis of the story of Hagar

A major problem encountered by feminist scholars seeking to 'redeem' the Hebrew scriptures from both their undeniable internal patriarchal bias, and the way in which they have been used as tools of continuing patriarchy, is the apparent lack of acknowledgement within the texts themselves of the oppression of women in the societies they are depicting. Unlike the liberation theologians, feminist scholars have no tirades against the mistreatment of women upon which to draw in their dissection of the worst excesses of patriarchy in the texts. However, the voices of women are not entirely unheard in the Hebrew Bible, and neither is their common plight as victims. The story of Hagar, a curious pair of narrative sections set within the life of Abraham, offers a surprising resource from which it may be possible to draw themes with much broader use in constructing a feminist perspective on the Hebrew scriptures. Hagar's first appearance in the Abrahamic narrative is at the beginning of chapter 16, where God's elaborate declaration of his covenantal promise to Abram is immediately followed by a jarring reminder that his only wife, Sarai, is childless . Perhaps uncomfortably aware of this dissonance, Sarai offers this Egyptian slave-girl as a surrogate mother to give birth in her stead, an apparently common practice in ancient civilisations1. ...read more.

This language is very close to that used when God makes the covenant with Abram in chapter 12, and to the recent restatement of it in chapter 15 that precipitated Hagar's entry into the narrative. This promise also subverts Sarai's intention to build herself up by using Hagar; instead it is Hagar who will be built up. Hagar's response to this is unique in the entire Hebrew Bible- she names YHWH, as 'God who sees', and the narrator considers this seeing of Hagar by YHWH to be significant enough to warrant naming the spring concerned to mark the event. The description of Hagar's return can be interpreted in two wildly different ways- Trible focuses on the silencing of Hagar's voice as she returns to her suffering, and views Abram's naming of Ishmael as a suppression of Hagar's power and significance in his name6. However, as Jeansonne points out, this may equally demonstrate Abram abiding by Hagar's naming instructions7; indeed it is interesting that Sarai is absent from the episode, and Abram seems to silently obey Hagar just as he did Sarai at the beginning of the chapter. Hagar and her son do not reappear until Genesis 21, apart from a brief account of Ishmael's circumcision. In the interim chapters, God speaks again with Abram and, along with renaming him and his wife, promises that the heir to the covenant will not be Ishmael, but a son born to the now post-menopausal Sarah. ...read more.

This use and abuse mirrors the lot of women throughout history, downtrodden beneath the desires of men and other women who scramble for any scrap of status within the patriarchy. However, Hagar is not left alone to suffer; she is heard by God, and given a promise equal to that given to Israel's 'founding father'. I would suggest that in this story feminist scholars may find the seed of YHWH's care for women that may be used to unlock passages that seem irredeemably steeped in patriarchal attitudes. 1 John Drane, Introducing the Old Testament (Lion, 2000), p. 44, cf. Genesis 29 & 30 2 Nahum M. Sarna, The JPS Torah Commentary: Genesis (Jewish Publication Society, 1989) p. 119 3 Phyllis Trible, Texts of Terror: Literary-Feminist Readings of Biblical Narratives (Fortress Press, 1984) pp. 11-13 4 Sharon Pace Jeansonne, The Women of Genesis (Augsburg Fortress, 1990), p. 20; cf Judges 11:27, 1 Samuel 24:15, etc. 5 Trible, Terror, pp. 15-6 6 Trible, Terror, pp. 18-9 7 Jeansonne, Genesis p. 47 8 Trible, Terror, pp. 20-3 9 Trible, Terror, pp. 25-6 10 Trible, Terror, p. 27 11 Jeansonne, Genesis, pp. 51-2 ?? ?? ?? ?? Female power and victimhood in Genesis: a literary analysis of the story of Hagar Imogen Hardy THEO 2011 - Literature and Theology of the Old Testament ...read more.