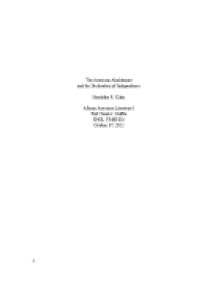 Frederick Douglass Vs. Hamilton. Though abolitionists David Walker and Frederick Douglass both identify with the natural laws and principals found at the very core of Thomas Jeffersons Declaration of Independence, their opinions of this text drastically

Both Walker?s pamphlet and Douglass?s speech use indirect allusion to borrow the argument being made here without having to restate it: all human beings, regardless of their status or stature, are ultimately ruled only by the laws of nature and those of their God. More simply, Walker and Douglass utilize this argument to quickly justify the idea that a slave, being born a man, should not have to answer to another man. In addition to this central idea of natural law, the Declaration of Independence represents the ideals of liberalism that Walker and Douglass hold dear: (1) all men are created equal, (2) they are endowed by God with unalienable, natural rights, (3) should the institutions of the status quo become destructive, men have the right to abolish them, (4) if subjected to abuses and usurpations, it is men?s duty to cast off the responsible government and secure a better future, and (5) if non-violent means prove to be futile, one must ?acquiesce in the necessity?and hold [the usurpers] as?Enemies in War, in Peace Friends? (1). ...read more.

In short, Walker?s numerous references to America?s founding document are meant to slowly set up the philosophical and moral framework by which Walker?s revolution is justified. Walker, unlike Douglass who seems to reject the use of all force, sanctions the use of violence against the ?natural enemies?who have stolen our rights? (235). This ?call-to-arms? is the purposeful end goal of Walker?s ?Appeal.? He wants to encourage his fellow black brethren to rise up and revolt against their white tyrants, ?whom [they] shall have to contend for [their] lawful right? (235). Walker reinforces this to be the purpose of his pamphlet by assuming the caustic, militant voice of an ?impudent and restless disturber of the public peace? (228) and tries to rouse its black readership into, as the editors of The Norton Anthology describe it, a ?fearless call to radical action?in the name of justice? (227). In contrast, Douglass?s speech, which he delivered in July of 1852 to the Rochester Ladies? Anti-Slavery Society, was (in contrast to Walker?s all-black audience) delivered to a group of forward-minded, white ladies. ...read more.