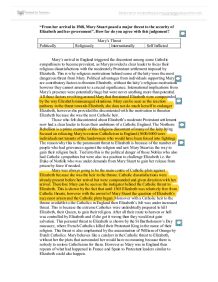 &quot;From her arrival in 1568, Mary Stuart posed a major threat to the security of Elizabeth and her government&quot;. How far do you agree with this judgement?

"From her arrival in 1568, Mary Stuart posed a major threat to the security of Elizabeth and her government". How far do you agree with this judgement? Mary's Threat Politically Religiously Internationally Self Inflicted Mary's arrival in England triggered the discontent among some Catholic sympathisers to become prevalent, as Mary provided a clear leader to focus their religious dissatisfactions with the moderately Protestant settlement imposed by Elizabeth. This is why religious motivations behind some of the laity were the most dangerous threat from Mary. Political advantages from individuals supporting Mary are contributory factors to threaten Elizabeth, without the laity's religious motivations however they cannot amount to a crucial significance. International implications from Mary's presence were potentially huge but were never anything more than potential. All these factors revolving around Mary that threatened Elizabeth were compounded by the way Elizabeth mismanaged situations. Mary can be seen as the reaction pathway in the threat towards Elizabeth, she does not do much herself to endanger Elizabeth, however she provided the discontented with the motivation to threaten Elizabeth because she was the next Catholic heir. Those who felt discontented about Elizabeth's moderate Protestant settlement now had a clear leader to focus their ambitions of a Catholic England. The Northern Rebellion is a prime example of this religious discontent of many of the laity being focused on releasing Mary to restore Catholicism to England (5600/6000 were individuals not tenants of the landowners who would have been forced into fighting). ...read more.

This faction came to be mainly because of the fact that they wanted Elizabeth to name Mary as her heir. However this faction contained many powerful Nobles, who it seemed were plotting against Elizabeth around Mary. International threats revolving around Mary Stuart were potentially huge, especially from Spain who at that time were the major Catholic leaders in Europe. In theory it would be thought that Spain would want to support Mary Stuart onto the English throne because of her Catholicism. However because Mary Stuart was in the Guise family who controlled France and Scotland, then Spain would rather not have France effectively controlling England as well. Despite the disadvantages of Spain supporting Mary Stuart there are still examples of how Mary Stuart's presence in England gave rise to danger to the security of Elizabeth's throne from Spainish involvement, nor could Elizabeth ignore this potentially massive threat. For example the Ridolfi Plot which once again aimed to secure Mary's release and position on the English throne also included military assistance from Spain, however the plot was discovered and the troops did not come. Although the military did not come form Spain, Mary Stuart's qualities as a ruler i.e. she is Catholic, once again means that these international threats are going to see her as a means to weaken Elizabeth if not to replace her altogether. ...read more.

For example before the Northern Rebellion when Mary met Norfolk and she old him to get her released by force if necessary and Norfolk undoubtedly did what he was told and was involved in a number of plots to release Mary. Cecil knew about Mary's personal danger an tried to persuade Elizabeth to have her executed much earlier than she was, however Elizabeth refused, this is another example of how Elizabeth's indecision over crucial matters failed to remove the danger of Mary Stuart and is clearly linked to her mismanagement of matters as shown above. Mary Stuart's arrival in England was the instigator in many of the plots against Elizabeth. She was the turning point in the security of Elizabeth's throne, from being relatively calm pre 1568, to continuous strain on Elizabeth's throne after 1568. Mary herself was not the actual threat to Elizabeth, but she was the motivation for them. Most significantly religious threats orbiting around the fact that Mary was Catholic and placing Mary on the throne were paramount compared to all other motivations. Political factors were contributory to religion and international threats were conceivable but never got off the ground. However Mary's overall threat could have been reduced by Elizabeth but of her mismanagement. Nobody troubled Elizabeth more than Mary Stuart in her reign due to the fact that she was the Catholic heir and therefore Catholics who felt religiously dissatisfied were prompted to threaten Elizabeth. Mark Rigby ...read more.

This essay tackles a wide range of consequences and keeps the focus on the threat that Mary posed to Elizabeth. There is detail from the period but it could be a lot more specific and there is a noticable lack of dates. The argument set out at the beginning is a good one but it needed to be pursued with a lot more analysis and evaluation of threat. ***