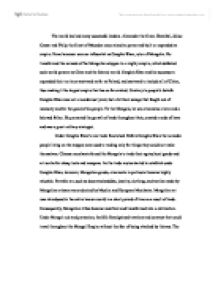 Genghis Khan's most significant contribution to the Mongol empire was the creation of a code of laws, referred to as the great Yasa.

The world has had many successful leaders. Alexander the Great, Hannibal, Julius Caesar and Philip the Great of Macedon once raised to power and built or expanded an empire. None however were as influential as Genghis Khan, ruler of Mongolia. He transformed the nomads of the Mongolian steppes to a mighty empire, which defeated such world powers as China and the Islamic world. Genghis Khan and his successors expanded their territory westward as far as Poland, and eastward to include all of China, thus making it the largest empire that has so far existed. Contrary to people's beliefs Genghis Khan was not a murderous tyrant, but a brilliant savage that fought out of necessity and for the good of his people. To the Mongols, he was viewed as a hero and a beloved father. He promoted the growth of trade throughout Asia, created a code of laws and was a great military strategist. Under Genghis Khan's rule trade flourished. Before Genghis Khan the nomadic people living on the steppes were used to trading only for things they could not make themselves. ...read more.

It is believed to have been first established at the quritai of 1206 when Genghis Khan was proclaimed as the leader of Mongolia. The Yasa is considered to be the first sign of democracy in the East and the source of the ideals that shape today's democratic, capitalist Mongolia. What is surprising to many people is that Genghis Khan, a character wrongly portrayed as a ruthless tyrant is associated with democratic principals. He however, instituted many of the same basic principles that form the foundation of modern democracy nine years before King John signed the Magna Carta. He codified the four basic principles that make a country a democracy known as participatory government, rule by law, equality under the law, and personal freedoms of religion and speech. The Yasa also brought peace and harmony to the Mongolian steppes. After Genghis Khan was declared the Khan of Mongolia he said, "I will rule them by fixed laws so that rest and happiness shall prevail in the world." Since the punishment of committing any crime was usually death, rules were taken very seriously. ...read more.

Furthermore, the use of columns with professional scouts gathering intelligence helped the Mongols to locate the enemy armies much more rapidly. They obtained information from travelers, merchants, farmers and anyone else who might have had any useful knowledge. They learned about mountain passes, roads, fortified places, towns and military forces that they might have encountered on a campaign. Genghis Khan died on August 18, 1227, and was buried in a secret location in Mongolia. He was feared by civilizations from France to Japan, while loved and respected by the people in his own homeland. He began the creation of what was to become the largest empire the world has ever known. He was not a mere barbarian but rather a great leader that molded illiterate nomads of Mongolia into superb horseman and fierce warriors. As a result of his conquests trade flourished and art underwent a profound change. He for the first time in Mongolian history codified laws that are still being used in many villages in Mongolia. He structured his army in a unique fashion and used many brilliant warfare tactics, which led to his great conquests. ...read more.