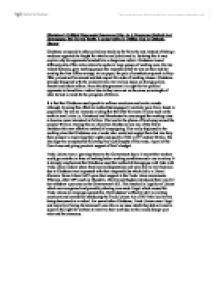 Gladstone's Political Opponents Denounced Him As A Dangerous Radical And Demagogue

Gladstone's Political Opponents Denounced Him As A Dangerous Radical And Demagogue. But He was Really A conservative In Politics And In Outlook. Discuss Gladstone compared to other politicians stood out far from the rest. Instead of taking a mediocre approach he fought for what he really believed in. By doing this it may explain why his opponents branded him a dangerous radical. Gladstone toured different parts of the nation where he spoke to large groups of working men. He also visited factories, gave working people the impression that he was on their side by creating the Post Office savings, tax on paper, the pale of constitution speech in May 1864, praised self command and had respect for order of working classes. Gladstone strongly disagreed with the conservatives over various issues on foreign policy, finance and admin reform. From this disagreement it is right for his political opponents to brand him a radical due to they were not on the same wavelength of what he had in mind for the prospects of Britain. ...read more.

Trade Unions were a growing threat to the Government due to it meant that workers could go on strike in favor of seeking better working conditions and a rise in salary. It is strongly emphasized that Gladstone used the method of demagogue with links with Trade Union leaders where they received deputations and were able to visit factories due to Gladstone was impressed with their responsibility which led to a Liberal dilemma. Some Liberal MP's gave their support to the Trade Union movements. Whereas, other MP's such as Mundella, Morley and Hughes introduced their own bill but withdrew a promise on the Government's bill. This resulted in Legality of Unions which was recognized and peaceful picketing was made illegal which caused for Trade Unions to campaign against this. By Gladstone's effective skill in exciting emoticons and crowds by introducing the Trade Unions Act of 1871 this lead to him being denounced as a radical. ...read more.

This defeat displays that politicians had already denounced him as a dangerous radical and were not ready to give Ireland this radical privilege. This caused for MP's to revolt against this bill which saw the fall of Gladstone. Gladstone's policies of reform did often challenge the concepts accepted by the establishment which summoned evidence of radicalism in Gladstone. Concepts such as paper duty were opposed by the Lords and the Civil service reform was opposed by Whigs in his own party. The Civil Service reform had been appointed by Gladstone in 1853 to investigate appointment in the civil service. Supported by the Administration reform Association in 1855 under Samuel Morley, Northcote- Trevelyan recommended a competitive examination. The examinations introduced still reflected the structure of society. The civil service was divided into two grades which roughly corresponded with society which led to an exam for book-keeping based on English history while the exam for the upper grade was based on classics. Many aristocrats objected to this measure and the foreign office were excluded from the act. In conclusion ...read more.