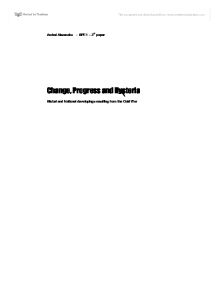 Global and National developings resulting from the Cold War.

Andrei Alexandru - SPE1 - 3rd paper Change, Progress and Hysteria Global and National developings resulting from the Cold War After the war, Europe was torn and destroyed. Some historians called it the end of Europe. The people and cities were ruined by the massive war efforts. America, wanting to recover Western Europe in order to help democracy grow and maintain a large economic market for western businesses, decided to give aid to Germany. Tens of billions of dollars were shipped to Western Europe. It was the largest charitable gift in history. The Marshall Plan, named after US General Marshall, was a success. Western Europe recovered fully and then some. By 1960, Western Europe was well above pre-war production levels and its people were living better than ever. Across the iron curtain, little was being done. Stalin was disassembling the factories of Poland and East Germany and literally rebuilding them on Russian soil. It was an amazing but devastating accomplishment. Part of his collectivization plan moved peasants and factories to the cities. The factory re-location created city slums in Russia and turned the buffer states of Poland and East Germany into agricultural states. Stalin felt that an agricultural state would not be a military threat. He created a very effective buffer zone out of Eastern Europe. Through collectivization, Stalin's armies starved, murdered, and raped more people than Hitler ever did. It was a horrible ordeal for those in Eastern Europe. However, the scope of the plan and its ruthless execution are truly admirable. Stalin's reign fell somewhere between reckless madman and ruthless genius. The first real conflict began in divided Berlin. The city had been split into occupation zones after the surrender of Germany. The Russians controlled West Berlin while Britain controlled the northwest and America held the southwest. Stalin, the leader of Russia at the time, wanted to take West Berlin. The situation was awkward in West Berlin because it was surrounded on all sides by East Germany. ...read more.

Attack planes were built and perfected in order to combat enemy bombers. Anti-missile systems, such as the Star Wars laser concept, were tried and built in order to reduce the number of missiles that reached Ground Zero. The militaries received an amazing budget so that they could better be prepared to fight the enemy. Conventional weapons were developed for situations such as Vietnam where nuclear warfare would not be used, or for anti-nuclear purposes, such as fast-attack submarines. The militarization of both nations was an extension of each county's fear. There was always the fear of a surprise attack. There were even some who supported the use of a surprise attack. Bomb shelters were built in basements and drills were performed in schools. The fear of the ever-present enemy was an exhausting ordeal. People identified themselves by their nations and separated themselves from those that were the enemy. Identity was based on nationalism, a concept that ignited World War One and World War Two. Nationalism, a dangerous means of identifying oneself, was the driving force behind militarization. No red-blooded American would allow his country to be attacked. In order to make sure of this, the government used all available technology to defend the nation. It was a very dangerous time. The Cold War extended beyond foreign policy and reached into the spirits of America and the Soviet Union. Fear of subversion, espionage, and Communist sympathizers ran rampant in America. Senator Joseph McCarthy from Wisconsin exemplified the distrust in the United States and gained power because of it. Communist "witch hunts" led to unsubstantiated attacks on innocent people across the nation and in many different industries. The House Committee for Un-American Activities was responsible for investigating subversive citizens in the United States. Many trials of famous individuals were televised across the country and led people to believe that internal sedition was a real problem in America. ...read more.

The entire situation is reminiscent of the Imperialism, which put the powers of Europe against each other one hundred years ago. The only difference between Imperialism and Spheres of Influence is that there is no profit in an ally. The United States and Russia were simply trying to be bigger and better than the other. The insecurity of both nations drove the competition onward. From Berlin to Korea to Vietnam to Cuba, the two nations fought hard to gain an inch of influence. Like kids on a playground, the nations issued declarations and threats about their personal space. The predominant feelings were envy, fear, and insecurity. These feelings led to competition in all things, including weapons. That is the foundation of the Cold War. The Psychology of the Cold War George Orwell often wrote about governments oppressing its people through psychology. The one concept that kept the citizens of Orwell's hypothetical countries dedicated to the causes of the governments was nationalism. Nationalism allows people to unite behind a cause and identify an enemy. Those are dangerous concepts. Unification breeds security and a desire to take risks. The formation of an enemy gives that group of unified people something to act against. Orwell showed this in his novels and America showed this in the Cold War. An ever-present enemy gives a mob of citizens a scapegoat to blame for the ills of the nation which were caused by the nation. McCarthyism is the real life example of this concept. Insecurities can be blamed on "Communist subversion" without any evidence because the rest of the nation supports the claim. Mob mentality allows injustices. The Cold War allows a mob mentality. It is lucky that the mob mentality of the Cold War didn't lead to an overly aggressive action. The possibility of an unprovoked first strike was always present because of the Cold War mentality. The only thing that prevented such a strike was the guaranteed counter-strike. If it weren't for Mutually Assured Destruction, the world would be a very different place. ...read more.