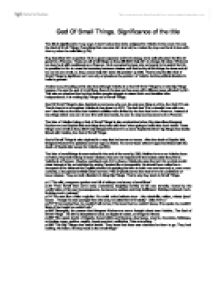 God Of Small Things - Significance of the title.

God Of Small Things. Significance of the title The title is significant in many ways. It summarizes the niche assigned for Velutha in the novel. He was the God of Small Things. Everything that concerns him is small, he makes tiny toys and he is in love with Ammu, whom he calls little (p.74). Roy describes him as perfect. He is a good carpenter and he is strong, he is well-educated. But it is all good for a Paravan. These are all small things as they still didn't help him to change his class. Whatever he does he is still considered as a Paravan. He is accepted by Ipes only as long is he is useful. So it is impossible for him to cross the boundary between classes and that is why all the things he does and all he can do are small, i.e. ...read more.

Inured by the confirmation of his own inconsequence, he became resilient and truly indifferent. Nothing mattered much. Nothing much mattered." p.74 "He was like a little magician. He could make intricate toys - tiny windmills, rattles, minute jewel boxes...Though he was younger than she was, he called her Ammukutty - Little Ammu." p.217 "If he touched her, he couldn't talk to her, if he loved her he couldn't leave, if he spoke he couldn't listen, if he fought he couldn't win." p.264 "Strangely, the person that Margaret Kochamma never thought about was Velutha...The God of Small Things...He left no footprints in sand, no ripples in water, no image in mirrors. p.266 "She upset stacks of lingerie, ironed skirts and blouses, shampoos, creams, chocolate, Sellotape, umbrellas, soap, quinine, aspirin, broad spectrum antibiotics. Take everything..." p.338 "The Big Things ever lurked inside. They knew that there was nowhere for them to go. They had nothing. No future. So they stuck to the small things" ...read more.