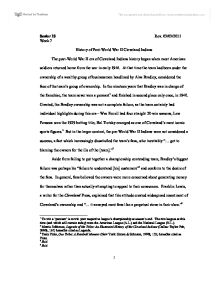 Senior IS Rev. 03/03/2011 Week 7 History of Post-World War II Cleveland Indians The post-World War II era of Cleveland Indians history began when most American soldiers returned home from the war in early 1946. At that time the team had been under the ownership of a wealthy group of businessmen headlined by Alva Bradley, considered the face of the team's group of ownership. In the nineteen years that Bradley was in charge of the franchise, the team never won a pennant1 and finished in second place only once, in 1940. Granted, the Bradley ownership was not a complete failure, as the team certainly had individual highlights during this era-- Wes Ferrell had four straight 20-win seasons; Lew Fonseca won the 1929 batting title; Hal Trotsky emerged as one of Cleveland's most iconic sports figures.2 But in the larger context, the pre-World War II Indians were not considered a success, a fact which increasingly dissatisfied the team's fans, who inevitably "... got to blaming the owners for the ills of the [team]."3 Aside from failing to put together a championship contending team, Bradley's biggest failure was perhaps his "failure to understand [his] customers"4 and conform to the desire of the fans. ...read more.

into the Baseball Hall of Fame in 1998.17 And most importantly, he played a huge role in bringing Cleveland a World Series championship in 1948. Prior to the 1948 season, the Indians had not won a pennant in twenty-eight years and had never captured a World Series title. But in two years, Bill Veeck was able to bring to Cleveland what no other previous owner could. For the people of Cleveland, 1948 was a dream year. "It was like winning World War II all over again," says Pluto.18 The promotional genius of Veeck combined with his ability to make successful trades provided a winning formula that was rare for the Cleveland Indians. Not surprisingly, the fans responded, and the Indians set a major league attendance record of 2,620,627 in 1948 that stood until the Los Angeles Dodgers attracted 2,755,184 fans in 1962.19 Coming off a championship season, the Indians were expected to perform equally well in 1949. During their championship season, the Tribe led the A.L. in Batting Average (BA), Earned Run Average (ERA), and Fielding Percentage. Player-manager Boudreau won A.L.'s Most Valuable Player (MVP) award, Gene Bearden and Bob Lemon were twenty game winners, and Bob Feller added a similarly impressive 19 wins. ...read more.