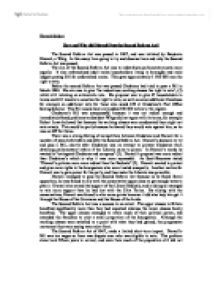 How and Why did Disraeli Pass the Second Reform Act?

There was a strong feeling of competitism between Gladstone and Disraeli for a number of years both before and after the Second Reform Act. Disraeli's decision to try and pass a Bill, shortly after Gladstone was an attempt to prevent Gladstone from obtaining parliamentary reform if the Liberals came to power. In Disraeli's words he wanted to "extinguish Gladstone and company" (2). Disraeli's proposal was more radical than Gladstone's which is why it was more successful. As Scott-Baumann stated "Disraeli's policies were more radical than the Radicals" (2). Disraeli wanted to protect and give more rights to the bourgeoisie who were treated unequally. ...read more.

The upper classes managed to retain much of their political power, and extended the franchise to only a small proportion of the bourgeoisie. Although the working classes were satisfied to a point with what they had gained, the progressive movement they were seeing was only a front. The Second Reform Act of 1867, made a limited short-term impact. Disraeli's Bill was too vague so there was dispute over who was eligible to vote. This problem alone took fifteen years to correct, and even then much of the population still did not have the right to vote. It also did not have the desired effect on the Conservative Party. Although they did come to power and Disraeli became Prime Minister, they did not stay in power for long, in fact they lasted for less than one year. ...read more.