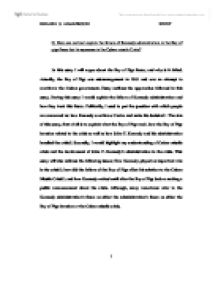 How can we best explain the failure of Kennedy administration in the Bay of pigs fiasco but its successes in the Cuban missile Crisis?

221 7. Welch,R.E, (1985) Response to Revolution: United States and the Cuban Revolution, University of North Carolina: Paperback. P.65 8. Blasier. C, (1976) the hovering giant: US responses to revolutionary change in Latin America, University of Pittsburgh, Paperback, P.201. prominent of the anti Castro Cuban exiles, one who genuinely believed in a free, democratic Cuba. Yet, because he was one of the few sensible people to criticize the plan, the CIA did its best to dismantle the MRP, his revolutionary organization. Besides, the CIA was not designed to conduct large scale invasions, and it was foolish of them to believe that they could. There were too many errors in the actual operation. The fact is Kennedy and his advisers should have realized that the plan was risible. The only person to really speak was Senator J.William Fulbright. Objections were raised by people such as Abram Chayes and Arthur Schlesinger, but they did not really push their point across. One of the most crucial decisions was supposedly Kennedy's cancellation of the second air strike against Castro's air force. The first attack had not worked because the rebels had been using dilapidated B-26. The logic if the planes were disguised, then nobody would know of U.S. involvement. This is the reason why Kennedy did not support the invasion with more American firepower, when the exiles mistakenly believed he would. Yet it was painfully obvious that America was involved. One consequence was that the credibility of Adlai Stevenson in New York was destroyed when he related the cover story to the United Nations. America's involvement was discovered; perhaps Kennedy should have gone all the way. He was certainly advised to by some of the military. As Welch wrote, "Kennedy did not make his decision in a vacuum but rather in an organizational context which made inevitable his approval" (9). The Bay of Pigs only served to prove Castro's strength. ...read more.

However, for Khrushchev himself it was almost certainly a failure. At the end we conclude that the failure of the Bay of Pigs invasion was caused by misinformation and mismanagement, however, the Cuban Missile crisis resolved by Kennedy successfully which means that Kennedy had learned many things from the failure of Bay of Pigs. The Cuban missile crisis was a very dangerous episode, bringing the world's major military powers to the brink of nuclear war. Kennedy has been criticized for such policies as the failed Bay of Pigs invasion, which helped cement the Soviet Cuban relationship and led Khrushchev to think Kennedy, might be bullied. Yet most historians agree that it was Kennedy's good judgment. The lessons from the Bay of Pigs failure may have contributed to the successful handling of the Cuban Missile Crisis that followed. Bibiolography: * Allison, G.T, Essence of Decision: explaining the Cuban missile crisis, Boston: Little Brown, 1971. * Ernest. R, May& Philip .D. Zelikow, the Kennedy tapes: inside the white house during the Cuban missile crisis. Cambridge, Mass, London: Belknap Press, 1997. * Welch,R.E, Response to Revolution: United States and the Cuban Revolution, University of North Carolina: Paperback, 1985. * Langley. L.D, The United states and the Caribbean in the 20th Century, University of Georgia, hardcover, 1985. * Freeman, S.R, the United States and the Latin American sphere of influence, Krieger Pub co, Paperback, 1983. * Langley, L.D. The united states and the Caribbean in the 20th Century, University of Georgia, hardcover, 1985. * Blasier. C, the hovering giant: US responses to revolutionary change in Latin America, University of Pittsburgh, Paperback, 1976. * Garthoff, R.L, Reflections on the Cuban missile crisis, Washington, D.C: Brooking institution, 1989. * Fursenko, A. " one hell of a gamble": Khrushchev, Castro, Kennedy and the Cuban missile crisis, 1958-1964, London: John Murray, 1997. * Chayes. A, the Cuban missile crisis, Paperback, Oxford press, 1974. * Foreign Relations of the United States, Cuban Missile Crisis and Aftermath, Washington, D.C. : U.S. Department of State, 1996. ?? ?? ?? ?? KHALIFA S ALMAZROUEI 203INT 1 ...read more.