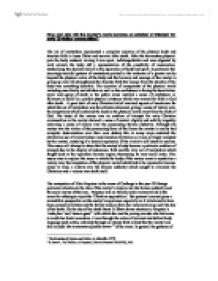 How and why did the martyr's body become an emblem of triumph for early Christian communities? The act of martyrdom represented a complete rejection of the physical body and absolute faith in Jesus Christ and survival after death. After the horrendous physical pain the body endured, leaving it torn apart, indistinguishable and even digested by wild animals the body left a representation of the possibility of resurrection, symbolising the dualistic belief in the separation of body and spirit. In particular the seemingly suicidal gesture of martyrdom pointed to the existence of a greater reality beyond the physical realm of the body and the bravery and courage of the martyr in giving up ones life strengthened the absolute faith that escape from the shackle of the body was something desirable. The rejection of components of the physical world including ones family and children as well as the confidence in facing the humiliation, terror and agony of death in the public arena instilled a sense of confidence in followers in belief in a perfect physical existence which was reward for faith in God after death. A great deal of early Christian belief involved aspects of asceticism for which the act of martyrdom was the ultimate statement, giving a sense of victory over the temptations which anchored the body in the physical world away from the truth of God. ...read more.

early Christian martyrs was a self-destructive mechanism, the way in which the martyr willingly accepted their fate meant the sense of fear and removal of personal thought and feeling against the state which the terror attempted to create was unsuccessful. The eagerness with which the martyr faces the punishment the and the way in which the martyrs clung to their message until the very end of their lives meant their deaths were very much their own making rather than the making of the state, this empowered the martyr and his/her message in many ways but most importantly stopped the attempt at reducing self-assertion of rebellious members of the state. Thus the 'stick' used by the Romans to oppress Christianity became a huge failure as the martyr provided a paradoxical victim, one who suffered the punishment but suffered it gladly. The martyrs used the strength of their faith up until the very end causing a scenario where rather than oppressing the Christian message the Romans were giving the martyrs a stage on which to promote it, in this way they were able to 'reconfigure the meaning of the pain which they endured'6. This turned the Roman application of punishment on its head so that the martyrs achieved a real sense of victory over the authority, their act and body could be held as a symbol of rebellion and the truth and strength of the Christian message. ...read more.

The martyr's action is comparable to the fashion in which Christ gave up his own life but it is the way in which they stride confidently into the arena, never giving up their message or faith in God with which they are able to promote their absolute faith in a rewarding afterlife which will reimburse them for the horrors they have faced on earth. The martyrs selfless self-destruction became an inspiration for early Christian communities due to the committed example they set for all Christians. The way in which they rebelled displaced the power of Roman authority, reversing their status of victims and reversing the effect of the persecutions committed against them. Through determination and absolute faith they were able to endure horrific pain and death by the state and yet be revered as heroes for the fashion in which they conducted themselves. Martyrdom is a symbol for faith absolute, early Christian communities revered the attitude of the martyr's endurance, courage and committal to Christ using it as an inspiration for the ascetic principles they adopted in following their faith. Further still the martyrs' action of throwing down their life gave unique confidence for all followers of Christianity that reward was waiting in the afterlife if one approached faith in God with a similar amount of piety. The martyrs' body was subject to the most horrific of destructions and yet came to symbolise strength, power and the glory of God. ...read more.