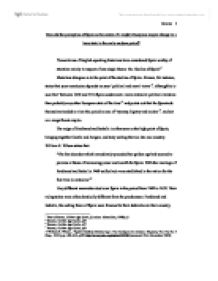 How did the perception of Spain as the centre of a mighty European empire change to a lame state in the early-modern period?

How did the perception of Spain as the centre of a mighty European empire change to a lame state in the early-modern period? 'Generations of English-speaking historians have considered Spain worthy of attention mainly in respect of one single theme- the 'decline of Spain"1 Historians disagree as to the point of the decline of Spain- Kamen, for instance, states that your conclusion depends on your 'political and moral views'2, although he is sure that 'between 1450 and 1714 Spain underwent a more extensive political evolution than probably any other European state of the time'3 and points out that the Spaniards themselves tended to view the period as one of 'tyranny, bigotry and racism'4, and not as a magnificent empire. The reign of Ferdinand and Isabella is often seen as the high point of Spain, bringing together Castile and Aragon, and truly uniting the two into one country. William E. Wilson states that: "The few decades which immediately preceded her golden age had seemed to promise a future of increasing power and wealth for Spain. With the marriage of Ferdinand and Isabel in 1469 unified rule was established in the nation for the first time in centuries."5 Very different monarchs ruled over Spain in the period from 1500 to 1670. ...read more.

His son, on the other hand, treats Spain as the centre of his empire. His controlling nature brought the empire to a grinding halt through lack of any efficient system of decision-making. Whilst Charles looked after a large empire, spanning the Holy Roman Empire, Spain, the Netherlands and the Americas, Philip does not have to rule over the Holy Roman Empire, Charles having left that part of his empire to his brother, Ferdinand. However, he still had something of the problems of religious discontent that his father had faced with Martin Luther, which was, for Philip, centred in the Netherlands. However, his controlling attitude to his empire made communications over the great distance between the Netherlands and Spain difficult. Philip infamously had all decisions regarding his empire made personally by him, and his notes are often seen in the margins of the papers which crossed his desk. Despite the fact that there were several ministers serving under Philip, he tended instead to keep only his own council, and even to try to extract decisions from those ministers without furnishing them with the information required, and even playing those ministers against each other with regard to the knowledge he allowed them of state affairs, afraid of anyone but himself having control. ...read more.

Parker alludes to a criminal underworld that existed in many cities, such as Seville, in times of hardship in order to survive, and that infanticide was not an unheard of option to poorer families.22 This underworld of crime was seen as a parasitic drain on an already unstable economy.23 Spain existed for years on a reputation not due to the country. The grand age of Ferdinand and Isabella, where their aims were clear, and their dedication to those aims absolute, was not carried through into subsequent rulers. Military victories which were attributed to Spain, such as that at Lepanto in 1571, were, in actual fact, only partially belonging to them. Lepanto was, in fact, fought, not by Spain, by the Holy League, a coalition of not only Spain, but also Genoa, Venice and the Papacy. The view of Spain as 'great empire' was really little but an illusion left from earlier ages. As Spain failed to live up to this expectation, producing instead uninterested rulers, madmen and secretaries, the European notion of them as a great power crumbled. Certainly by 1588, the attack of the Spanish Armada on England, and subsequent defeat, Spain was seen as something of a failure. Other powers emerged to take its place, as the world continued on its pattern of change. ...read more.