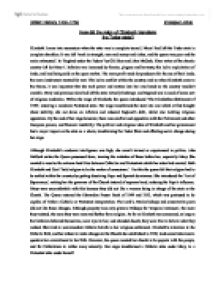 How did the reign of Elizabeth transform the Tudor state?

British History 1400-1750 Inderjeet Johal How did the reign of Elizabeth transform the Tudor state? Elizabeth I came into succession when the state was in complete turmoil. Mary I had left the Tudor state in complete shambles. It was left 'weak in strength, men and money and riches, and the queen was poor and the realm exhausted'. In 'England under the Tudors' by GR Elton and John McGurk, Elton writes of the chaotic country left by Mary I. Inflation was increased by famine, plagues and harvests; this led to exploitation of lands, and land being sold on the open market. The more profit made by producers for the use of their lands, the more landowners wanted for rent. This led to conflict within the country, and so when Elizabeth came to the throne, it was important that she took power and matters into her own hands so the country wouldn't crumble. Mary and previous rulers had left the state virtually bankrupt, and England was in need of some sort of religious mediation. Within the reign of Elizabeth, the queen introduced 'The Elizabethan Settlement of 1559', restoring a moderate Protestant state. Her reign transformed the state into one which at first brought about stability; she cut down on inflation and reduced England's debt, whilst also tackling religious opposition. By the end of her reign however, there was conflict and opposition with the Parliament and other European powers, and financial instability. The political and religious ideas of Elizabeth and her government had a major impact on the state as a whole, transforming the Tudor State and effecting social change during her reign. Although Elizabeth's academic intelligence was high, she wasn't trained or experienced in politics. John McGurk writes the Queen possessed ideas, learning the mistakes of those before her, especially Mary. She wanted to resolve the extreme hostilities between Catholics and Protestants which her sister had created. ...read more.

Therefore, most historians feel that the queen, although she was advised by Cecil and men like Burghley, used her own policies and ideas to transform the religious and financial aspects of the Tudor State. During the latter years of her reign, Elizabeth became worried about the possibility of unity of France and Spain. The country was too weak to handle any conflict if they joined together. Although: "Cecil laboured successfully at the restoration of armed forces, the developments of armaments factories...the rebuilding of financial stability" the country still needed unity with the outside powers. Elizabeth wanted the English people to have faith in the monarchy, to respect the righteousness of her rule. So she avoided costly entanglements, 'rarely has an English monarch so abhorred foreign wars'. However domestic peace just caused domestic problems. Elizabethan England's foreign policy lay with three powers; Scotland, France, and Spain which was controlled by Mary I's former husband Philip II. However, Elizabeth never viewed war as anything but a waste of resources, and she sought to avoid it as much as possible. She believed that England must act as a mediator between France and Scotland, and courted both countries but never committing to a definite policy. When it became clear that Elizabeth would not marry Philip II of Spain, he attempted to secure peace, with the queen. This suited Elizabeth particularly since English wealth relied on trade with the Low Countries under Habsburg control. Elizabeth also agreed to stop the war Mary I had started with the French, and gave up English control over Calais, which was a blow to England's prestige. Elizabeth maintained this peace for a very long time, which gave financial stability to the country, transforming the Tudor state into one of achievement in the beginning of the reign. However this did not last. In 1558, there was a widespread revaluation of custom rates in Europe, and so Philip II saw this opportunity to remind the queen of her dependence on foreign trade, with Spain and the Low countries, yet in 1563, he tried to stop this. ...read more.

The queen faced much opposition, as has been seen above, from religious groups, and from the European powers. Chris Haigh wrote, the queen 'died unloved and almost lamented'. She became bankrupt, showing the queen merely shelved her problems, and avoided trying to solve them; such as the succession issue, and her 'sale of crown lands to finance war'. Haigh writes that after the Elizabethan settlement, the queen did not feel as strongly to do anything more, because there was no reason of why she would. In conclusion, the beginning of Elizabeth's reign showed a great transformation in the Tudor state. She was able to learn from the mistakes of Mary and bring the country back to financial stability. she pushed out many Puritans and Catholics that did not agree with her views, and transformed the Catholic state into a Protestant one. However, this Protestantism wasn't extreme, and Elizabeth still allowed Catholic beliefs as long as the Catholics conformed to her beliefs. Elizabeth tried to keep the Tudor state away from conflicts with the other European powers, and this enabled the country to tackle problems at home, and increase the prosperity and wealth. Nonetheless, this did not last for long. The Tudor state under Elizabeth came under conflict and instability. Even though Elizabeth's regime successfully tackled most of these problems, especially after the defeat of the Spanish Armada, the costs of war caused major effects on the economy. The rich became richer, the poor became poorer, and by the end of her reign, the Tudor state was in worse condition as it had been when she came to the throne. The transformation of the Tudor state was one which at first was of great improvement, and then by the end of her reign was one of loss. The Tudor state began to lose any respect they could have for a woman in such a position, and were relieved when she finally named James I as the heir to the throne. ...read more.