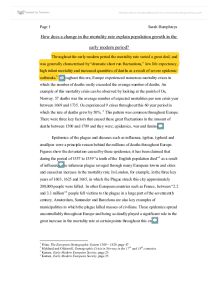 How does a change in the mortality rate explain population growth in the early modern period?

Page 1 Sarah Humphreys How does a change in the mortality rate explain population growth in the early modern period? Throughout the early modern period the mortality rate varied a great deal, and was generally characterised by "dramatic short run fluctuations," low life expectancy, high infant mortality and increased quantities of deaths as a result of severe epidemic outbreaks.1 Throughout this era, Europe experienced numerous mortality crises in which the number of deaths vastly exceeded the average number of deaths. An example of this mortality crisis can be observed by looking at the parish of Os, Norway. 57 deaths was the average number of expected mortalities per non crisis year between 1669 and 1735. Os experienced 9 crises throughout this 60 year period in which the rate of deaths grew by 50%. 2 This pattern was common throughout Europe. There were three key factors that caused these great fluctuations in the amount of deaths between 1500 and 1789 and they were; epidemics, war and famine. Epidemics of the plague and diseases such as influenza, typhus, typhoid and smallpox were a principle reason behind the millions of deaths throughout Europe. ...read more.

The Thirty Years War from 1618 to 1648 became infamous for the amount of deaths it caused, as regions such as Lippe lost 35% of their population between 1618 and 1648.7 Although these figures convey the extent to which battles throughout the European lands affected the rate of deaths, the majority of deaths were actually caused by the spreading of epidemics throughout the armies; this fact again emphasises the importance of the epidemic outbreaks on the mortality rates. Page 3 Sarah Humphreys The ever fluctuating mortality rate of the early modern period, explained by the three killers of epidemics, famine and war, can be held accountable for the changing population rate of this era. Without a doubt, the mortality crises "interrupted normal population growth." 8 Not only did the increasing mortality rate highlight the fact that the population growth was affected in the way that simply the amount of people dying increased, but also that these deaths then had a knock-on effect, and shaped population growth in other ways. A decline in marriages was experienced as a consequence of an increased mortality rate, as civilians found themselves more unwilling to marry into an uncertain future or simply because they lost their future spouse to one of "Malthus's three positive checks"9 of war, epidemic and famine. ...read more.

This is due to the fact that the population growth was affected throughout this era by the increasing numbers of deaths, the decline in marriages and the decreasing birth rates at certain crisis points, all of which are aspects or knock-on effects of the mortality rate. It is evident the crucial factor which changed population growth throughout this period were the epidemics. As Flinn argues, "the key to population growth or decline in early modern Europe (was) ...infectious disease."13 For example, if it had not been for these epidemics, the rate of deaths would have not been so incredibly high, which in turn would have meant there would have been more civilians to marry and reproduce and also increased levels of confidence in starting a family. Although the issues such as the age at marriage, financial status and birth control affected the population growth, the mortality rate, and in particular the wide spread epidemics, experienced throughout this era explained and accounted for a huge proportion of the population fluctuations and growth. How Does a Change in the Mortality Rate Explain Population Growth in the Early Modern Period? 12th November 2004 Sarah Humphreys School of Politics Mr. ...read more.

This essay covers mortality well but is rather one- sided and could be improved by a more in-depth consideration of the role of fertility in population growth. It would also be helpful to give an overview of the overall changes in population level in Europe in this period to put the arguments in a wider context.
4 stars.