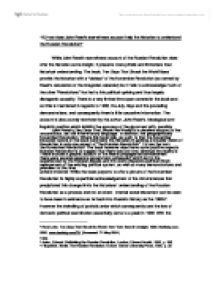 How does John Reed's eye-witness account help the historian to understand the Russian Revolution?

10) How does John Reed's eye-witness account help the historian to understand the Russian Revolution? While John Reed's eye-witness account of the Russian Revolution does offer the historian some insight, it presents more pitfalls and limitations than historical understanding. The book, Ten Days That Shook the World1does provide the historian with a "tableau" of the November Revolution (so named by Reed's calculation of the Gregorian calendar) but it fails to acknowledge much of the other "Revolutions" that led to this political uprising and thus largely disregards causality. There is a very limited time span covered in the book and so little is mentioned in regards to 1905, the July Days and the preceding demonstrations, and consequently there is little causative information. The account is also acutely restricted by the author, John Reed's, ideological and linguistic position which inhibits the accuracy of the document with, possibly unconscious, yet still inflammatory language. In addition, the geographically insulated nature of the book constrains the historian in gaining a broader vision of the November Revolution. The book however does have some positive aspects. These include a graphic account of the heavy propaganda bombardment experienced by the Russian people and the vastly disparate political views prevalent at the time. ...read more.

Hence, when the Bolshevik party mounted a call-to-arms the militancy of the workers was extremely advantageous. While Reed's account of the November Revolution, recognises the radicalization and politicization of the masses with its detailed record of the propaganda bombardment, it disregards the reasons for the propagandas success. Certainly the bombardment would not have been so successful had the rapid modernization16 of Russia not occurred. This industrialization for military gain required taxation which caused a strain on the economy; there was also an increase in literacy and wide-spread urbanization17. In this tense economic atmosphere the tide of discontent was able to swell. The concentration in urban areas such as Petrograd, and literacy of the malcontented workers made for a proliferation of revolutionary ideas and zeal. Thus modernization can be seen to be a major factor in the ability of the Bolshevik party to influence the masses, attain support and then ultimately political power. Reed's account however, does not scrutinize the aforementioned causality and hence limits the help this document may provide to the historian. This eye-witness account is also limited in its ability to help the historian to understand the Russian Revolution by the author, John Reed's ideological bearing. ...read more.

Thus in failing to recognise the contrasting party support due to the geographical constraints of the book, Ten Days That Shook the World can only provide the historian with a limited understanding of the Russian Revolution. John Reed's eye-witness account is useful to the historian in two related aspects. Firstly, the book presents the historian with a strong impression of the bombardment of propaganda experienced by the Russian people, particularly those living in the cities, during this period. And secondly the book highlights the vastly differing political views that were prevalent. The book includes many of the proclamations issued, speeches given and newspaper articles published, and in doing so demonstrates the constant stream of ideas and debate that were critical to the revolutionary movement. Thus, in these regards Ten Days That Shook the World is able to aid the historians' understanding of the Revolution. Although John Reed's eye-witness account of the November Revolution does have some positive aspects, these do not negate the overall problems the book presents. The limited time frame and lack of causative information combined with Reed's strong Communist sympathies and geographically inadequate examination mean that Ten Days That Shook the World is not sufficiently useful to the historians' understanding of the Russian Revolution. ...read more.