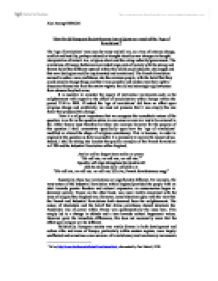 'How far did European Society become less religious as a result of the 'Age of Revolutions'?

'How far did European Society become less religious as a result of the 'Age of Revolutions'? The 'age of revolutions' were seen by many and still are, as a time of extreme change, conflict and hostility, perhaps induced or brought about by new changes in thought, interpretation of natural law, religious ideals and the ruling authority/government. The revolutions of Europe furthermore provided large parts of society with the strong and fervent belief that different systems within this world could indeed be challenged and that new ideologies could be implemented and maintained. The French Revolution seemed to usher a new confidence into the common people, with the belief that they could actually change things and that it was possible and maybe even their right to dissociate themselves from the ancien regime, the old and seemingly rigid structure from whence they had come. It is essential to consider the legacy of intellectual movements such as the enlightenment with regard to the effect of secularisation within Europe within the period 1750 to 1850. If indeed the 'age of revolutions' did have an effect upon religious change and conformity, we must not presume that it was simply this one factor that produced this change. Now it is of great importance that we recognise the nomothetic nature of the question, in as far as the question states in one sense an area too vast to be covered in full. ...read more.

All appeals to Rome are forbidden.'- (J. Mcmanners, p.37) The French Revolution and the breakdown of Divine Providence meant a breakdown in the superiority and stability of religion. Subsequently, if God wasn't effective or important within leadership and rule of the country, then how important was He within society in general. Here we can see a turn in change of ideals and essentially hallmarks of what conjugates a revolution, in terms of public thought and hegemonic values. Following on from this stage and a man by the name of Napoleon arrives, whose military conquests and meteoric rise to become 'Empereur des Francais' would soon threaten the stability of Europe. A revolutionary in every sense of the word, he was quick to be respected and admired across France as someone who was 'of the people', who wanted to abolish feudalism forever and move France onto greater things. In 1801, he agreed a religious settlement ('Concordat') with the Catholic Church. The Catholic Church was recognised as the 'religion of the great majority of the population', the clergy were to be paid as state officials and purchasers of former Church lands were guaranteed possession. However, he was careful not to be seen as restoring Catholicism in its fullest sense and so was quick to issue this statement with the agreement of 1801: 'The people must have a religion and that religion must be in the hands of the government'- (Napoleon, 1801) ...read more.