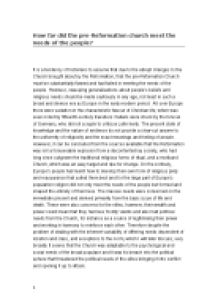 How far did the pre-Reformation church meet the needs of the people?

﻿________________ How far did the pre-Reformation church meet the needs of the people? ________________ It is a tendency of historians to assume that due to the abrupt changes to the Church brought about by the Reformation, that the pre-Reformation Church must be substantially flawed and had failed in meeting the needs of the people. However, sweeping generalisations about people?s beliefs and religious needs should be made cautiously in any age, not least in such a broad and diverse era as Europe in the early modern period. All over Europe there were variation in the characteristic flavour of Christian life, which was even noted by fifteenth-century travellers: Italians were struck by the fervour of Germans, who did not scruple to criticise Latin levity. The present state of knowledge and the nature of evidence do not provide a clear-cut answer to the uniformity of religiosity and the exact meanings and feeling of people. However, it can be concluded from the sources available that the Reformation was not a foreseeable explosion from a discontented lay society, who had long since outgrown the traditional religious forms of ritual, and a moribund Church, which was an easy target and ripe for change. On the contrary, Europe?s people had learnt how to develop their own form of religious piety and reassurance that suited them best and for the large part of Europe?s population religion did not only meet the needs of the people but formed and shaped the entirety of their lives. ...read more.

for the coming year. This showed the stability of the Church with its strong faith system and how strongly people could relax within it. It is easy to imagine crowds laughing and singing during the processions and local plays and re-enactments. Society was also very much what we would, anachronistically, label ?superstitious? and the church provided the basis for quasi-magical practices. The official liturgy was adapted and extended to meet popular needs. The magic evoked from sacred objects was apotropaic ? concerned with protective magic ? both with the exorcism of evil spirits and benediction or divine blessing. The Church and its magic fulfilled the psychological needs of the people: protection from the bad things of the world. The largest candles were for example lit in bad weather to protect the house, while the candles of women (thin, red tapers) were lit in childbirth at the feet to protect mother and baby as the light of the candle was supposed to keep the devil away. Moreover, the palms blessed during the Palm Sunday liturgy were burnt during summer storms and herbs blessed in the Assumption of the Virgin were used as talismans and used for a variety of magic. These items were not part of official liturgy but had been blessed in Church. ...read more.

To conclude, it seems appropriate to return to the initial false assumption that the Reformation points to the failings of the pre-Reformation Church. As we have seen this was not the case and the Church was vibrant, adaptable and for the large part met the spiritual needs of the people, despite the rebellious exceptions and the increasing division between the elites political and economic expectations of the Church. Indeed, this can be further seen in the evidence that many people did not want the Reformation in its entirety, especially loosing their cults and rituals and in many places they clung to them obstinately. In 1553, Johann Marbach in Strasbourg wrote of the ?shocking scorn and little regard for the ministry of the Church? among the people of his city as people paid less for sermons than they had done for masses. In Brandenburg Catholic ritual forms survived for two generation after the Reformation and as late as 1598 one could still find the Palm procession, the functiones sacrae in the Easter liturgy and the lowering of the dove on Whitsun. The Reformation was not so much a success at local level as is sometimes imagined. This provides the most persuasive testament to the general, though not uniform, fulfilment of the church of the people?s needs and the largely effective role of the pre-Reformation Church. ...read more.