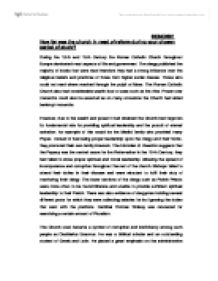 How far was the church in need of reform during your chosen period of study?

03/04/2001 How far was the church in need of reform during your chosen period of study? During the 15-th and 16-th Century the Roman Catholic Church throughout Europe dominated most aspects of life and government. The clergy published the majority of books that were read therefore they had a strong influence over the religious beliefs and practices of those from higher social classes. Those who could not read where reached through the pulpit at Mass. The Roman Catholic Church also had considerable wealth due to taxes such as the tithe. Power over monarchs could also be asserted as on many occasions the Church had aided bankrupt monarchs. However, due to the wealth and power it had obtained the Church had forgotten its fundamental role for providing spiritual leadership and the pursuit of eternal salvation. An example of this would be the Medici family who provided many Popes. Instead of bestowing proper leadership upon the clergy and their flocks, they promoted their own family interests. The Historian B. Reardon suggests that the Papacy was the central cause for the Reformation in the 16-th Century, they had failed to show proper spiritual and moral leadership. Allowing the spread of incompetence and corruption throughout the rest of the church. Bishops failed to attend their duties in their diocese and were reluctant to fulfil their duty of monitoring their clergy. The lower sections of the clergy such as Parish Priests were more often to be found illiterate and unable to provide sufficient spiritual leadership to their Parish. There was also evidence of clergymen holding several different posts for which they were collecting salaries for but ignoring the duties that went with the positions. Cardinal Thomas Wolsey was renowned for exercising a certain amount of Pluralism. The Church soon became a symbol of corruption and inefficiency among such people as Desiderius Erasmus. He was a biblical scholar and an outstanding student of Greek and Latin. ...read more.

Mary I was portrayed by John Foxe (Book of Martyrs) as an "evil woman who took delight in the burning of Protestant Martyrs." She took the Church of England back to the traditional Catholic faith. She had been raised a Catholic and with the first Statute of Repeal in 1553 Mary began to wipe out all traces of Protestantism. Mary was a devout Catholic by nature, therefore she believed that the Protestant faith was heretical and would not ratify it in England. Another reason that provoked Mary to reinstate the Catholic faith was to retain good relations with the Spanish Habsburgs to counter balance the French threat. Mary's reasons for reform were based far more on religion than political reasons. The historian, Christopher Haigh stated, "There can be little doubt of Elizabeth's personal Protestantism." By the time Elizabeth had ascended to the throne in 1558 England had undergone over twenty-five years of turbulent religious change. Being Protestant, Elizabeth was a political realist. She knew that her difference of religion could present a Catholic coalition of force, for example Spain and France versus England. This was a major concern, also in 1558 large sections of society were still Catholic and a return to a Pro - Protestant Church could provoke wide spread rebellion. Therefore Elizabeth adopted a religious policy that wouldn't isolate Catholics. Between 1559 and 1563, Parliament laid down the foundations of the Church of England, which still remain to this day without much further reform made to them. The motives for the Elizabethan Church Settlement vary but there are three major arguments. Firstly John Foxe believes that "Elizabeth pushed through a religious settlement against the opposition of the Catholics." Evidence for this argument is that in 1558 Elizabeth made a public display of walking out of Bishop Oglethorpe's mass as he raised the host. On the 1st February 1559 the Privy Council ordered the English Ambassador to Pope Paul IV to return to England. ...read more.

Where as the need for Reform in Spain was primarily the National and Royal desire for purity of blood and a firm Catholic Church with doctrines that were without ambiguity. It seems also that forces behind the English monarch, Henry VIII, were influencing the break from Rome. A. G. Dickens argues that "Cramner and Cromwell were the principle agents in the process who manipulated events as far as they dared in the direction of Protestantism." During Elizabeth's reign the Church of England was firmly established with the Church Settlement of 1559. Although there is much debate as to what motives were behind it, it seems more than likely that Elizabeth's moderate Protestant reforms were implemented by her own wishes as to not provoke a rebellion. The Inquisition and the Council of Trent were the result of a realisation that if the Spanish monarchy wanted to keep Spain Catholic they would have to improve the quality of their priests and Monasteries. As Protectors of the Catholic Faith, the Spanish Monarchs were far more influenced by their religious beliefs and the threat of Protestantism, than the economic and political influences that motivated England. The Counter or Catholic Reformation of the 16-th Century expressed that the Catholic Church was aware of its mistakes and was able to correct them, this encouraged many Catholics to return. However Protestantism had already gotten a foothold in many parts of Europe such as Sweden, Germany, Netherlands and England. During the 16-th Century the Catholic Reformation had not been able to fight the growing number of Humanists and it was now clear that the Church would have to be more open-minded in the future if it were to remain popular. Throughout the 15-th and 16-th century religion did involve many aspects of government and dynastic issues. Elizabeth had chosen a moderate Protestant Church for diplomatic reasons that involved home and abroad, Henry needed to secure an heir to the Tudor throne and support his campaigns in France. The Catholic Church in Spain was so powerful that it was mainly influenced by honour and prestige rather than any other reason. ...read more.