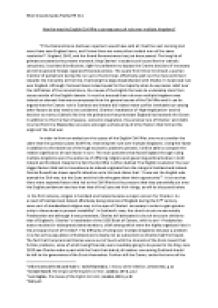 How far was the English civil war a result of rule over multiple kingdoms?

﻿Elliot GreenAmanda FlatherHR 111 How far was the English Civil War a consequence of rule over multiple kingdoms? ?If the Remonstrance had been rejected I would have sold all I had the next morning and never have seen England more, and I know there are many other modest men of the same resolution?[1]. England, 1641, and the Grand Remonstrance has just been passed. The long list of grievances towards the present monarch, King Charles I included such issues like the ?catholic conspiracy?, local land distributions, right for parliament to bypass the Crowns decisions if necessary and other general foreign, legal and financial policies. The quote from Oliver Cromwell, a puritan member of parliament during the run up to the Civil war, effectively spelt out the mass sentiment towards the monarchy at the time, that being the large dissatisfaction with Charles I?s tyrannical rule over England. Although Cromwell does indeed speak for the majority when he expresses relief over the ratification of the remonstrance, the causes of the English Civil war do undeniably stem from issues outside of the English domain. It must be stressed that rule over multiple kingdoms was indeed an element that was encompassed into the general causes of the Civil War and it can be argued that the Crowns rule in Scotland and Ireland did indeed make conflict inevitable but varying other factors do also need to be considered. Charles I installation of ?High Anglicanism? and his decision to marry a Catholic fed into the grievances that protestant England had towards the Crown. ...read more.

However, this view is too simplistic. Yes it is true that as long as influence was to be maintained in Scotland and Ireland, money was needed to create armies in these regions and as long as this was apparent, confrontations between the Crown and parliament were bound to occur in England. However, it was not the rule over multiple kingdoms alone that contributed towards Civil War. Instead, factors such as the lack of a stable system of bureaucratic taxation and oppressive personality of Charles I did indeed feed into the grievances that led to Civil War. Further still one might even argue that the economic environment presented to both James I and Charles I following Elizabeth I’s reign was one less than favourable stability owing to the: “debts of at least £400,000 at her death”[12]. One might also argue that without religious intervention and the lack of stable taxation there might never have been risings in either Scotland or Ireland. Another factor that potentially led to the English Civil war was the supposed ‘personal rule’ or ‘eleven years tyranny’ of Charles I[13]. We have seen previously in this essay that Charles I personality did indeed contribute to the conflicts in Ireland and Scotland due to his installation Anglicanism in both kingdoms but it was not him alone that led to the Civil war but rather the crippling financial burdens of rule over multiple kingdoms that also contributed. This section will focus mainly on Charles’ political tyranny within England and the reasons why this led to national and local grievances. ...read more.