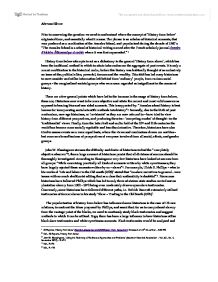 How has the Popularisation of 'history from below' influenced historians studying US race relations?

Prior to answering the question we need to understand where the concept of 'History from below' originated from, and essentially what it means. The phrase is an echelon of historical accounts, that was produced as a ramification of the Annales School, and popularised during the decade of 1960`s. "The Annales School is a school of historical writing named after the French scholarly journal Annales d'histoire �(c)conomique et sociale where it was first expounded." 1 History from below attempts to act as a dichotomy to the general 'History from above', which has been the traditional method in which to attain information on the aggregate of past events. It is only a recent modification in the historical realm, before this history was habitually thought of as exclusively an issue of the; political elites, powerful, famous and the wealthy. This shift has led many historians to now consider and utilise information left behind from 'ordinary' people, from various social groups - the marginalised societal groups who were once regarded as insignificant to the course of history. There are a few general points which have led to the increase in the usage of history from below, these are; Historians now want to be more objective and attain the correct and most valid answers as opposed to hearing bias and one sided accounts. ...read more.

This history from below, has influenced historians studying race relations in the US to be more cautious with white sources and study history from below in more depth, as the majority of the American Acts amended were by the government. History knows best how well the leading elites can remove occurrences from history - leaving only the under classes memories to cherish, what once existed. This contradicts with the view displayed by Ulrich B. Phillips, although slave testimonies may have abolitionist authors, they would more likely explain and depict the negatives of white supremacy than government documents and history written from a white perspective. However, a key issue that needs to be taken in to consideration is: Frederick Douglass was a politician - in essence a man who would not be a complete under class, thus his views have to be taken with care as it's not exactly 'history from below'. Additionally, the article - from the perspective of Douglass, outlines the control and struggle for power was won by the Southern parties. Douglass claimed that black people were "destitute of political memory"10. The article emphasis on the changes to various acts since the civil war and emancipation times, this influences historians studying US race relations to study sources in more depth and breadth, i.e. ...read more.