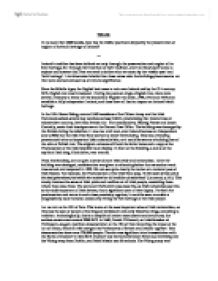 how has the visible past been shaped by the preservation or neglect of the built heritage of Ireland?

In no more than 1200 words, how has the visible past been shaped by the preservation or neglect of the built heritage of Ireland?

Ireland’s tradition has been defined not only through the preservation and neglect of its built heritage, but through the invention of their tradition, and it is this student’s aim to explore and answer this. First we need to define what we mean by the ‘visible past’ and ‘built heritage’. It is this student’s belief that these terms refer the buildings/monuments etc that were erected and seen as of cultural significance.

Since the Middle Ages, the English had come to rule over Ireland and by the 13th century BCE, English law was introduced.  During the years of Anglo-English rule, there were several attempts to throw off the shackles of English rule (1641, 1798, 1916 and 1919) and establish a fully independent Ireland, and these have all had an impact on Ireland’s built heritage.

In the 1916 Easter Rising, around 1600 members of the Citizen Army and the Irish Volunteers seized several key locations across Dublin, proclaiming that Ireland was an independent country, free from British rule.  The commanders, Pádraig Pearse and James Connolly, made their headquarters at the General Post Office. The building was damaged by the British during the rebellion. It was not until later, after Ireland became an independent state (1922) that the Irish Free State started to repair the building. This was a building pronounced to be an important Irish nationalist site, as it could be seen as a building free of the taint of British rule. The original columns still hold the bullet holes and a copy of the Proclamation of the Irish Republic is on display. In front of the building, a statue of the mythical Irish king, Cúchulainn, was erected.

From this building, we can gain a sense of pure Irish pride and nationalism. After the building was damaged, consideration was given to relocating before the restoration work was started and reopened in 1929. We can see quite clearly the notion of a national past of Irish history. For example, the Proclamation of the Irish State says, ‘In the name of God and of the dead generations from which she receives her old tradition of nationhood’ (Laurence, p.181). This clearly invokes the sense of Irish pride and tradition of all Irish people, reminding them where they come from. The statue of Cúchulainn also does this, as Irish nationalists see him as the most important of Irish heroes, thus a significant part of their legacy. For both the proclamation and statue in such close proximity together, it could be seen to enable a progressively more national community fitting the rich heritage of the Irish people.

Let us turn to the Hill of Tara. This is one of the most important sites of Irish nationalists, as this was the seat of power of the kings of prehistoric and early historical kings, according to tradition. Archeologically, this is a complex of ancient monuments and structures, the earliest constructed around 2500 BCE. In 1843, Daniel O’Connell, an Irish Member of Parliament, staged a political demonstration at the Hill of Tara favouring the repeal of the Act of Union, which in 1801 merged the Parliaments of Britain and Ireland together. This demonstration drew over 750,000 people. The site was significant due its association with the Battle of Clontarf in 1014 BCE. Clontarf was the battle between Brian mac Cennétig and his Viking army from Dublin, and Máel Mórda mac Murchada. The Viking army was repelled, and O’Connell’s positioning of his monster meeting at Tara was meant to be reminiscent, although we should be aware that O’Connell was not a cultural nationalist.

Since 1922, there have been archaeological works and surveys carried out at the Hill of Tara. In 2007, over 150,000 people met on the hill of Tara to take part in a human sculpture in the shape of a harp (an important and reoccurring symbol in Irish history) and spelling out "SAVE TARA VALLEY" for the rerouting of the M3 motorway away from Tara valley. This clearly shows that the Hill of Tara is still of a profound cultural heritage and that people wish to protect their cultural traditions.

Let us look at the neglect of the built heritage of Ireland. In 1929, the Ancient Monuments Act was designed to protect buildings dating from before 1700. We have to ask the question, was this because of the idea that the buildings after this time were tainted by the British occupation?

For example, the Royal Hospital in Kilmainham and Dublin Castle were both abandoned due to their colonial associations. Dublin Castle was the seat of British power in Ireland, a symbol of that power, and in 1922 when it was handed over to the Free Irish State, it stopped being the administrative complex. According to an anecdote, De Valera in the early 1930’s, ‘his followers wanted Dublin Castle razed to the ground and simply obliterate the memory of the English rule from it’ (DVD – Ireland).

The Royal Hospital was originally built in 1684 as a retirement home for soldiers, but after 1922 the Free Irish State used it partially as a storage location for national museum artefacts. As the building was built before 1700, the Ancient Monuments Act automatically protects it, but restoration was not completed until 1984 when it was re-opened as the Irish Museum of Modern Art.

In regards to these buildings, it can be argued that these structures were abandoned due to the close associations of British rule and this could be a large part of the main reason why they were abandoned. However, we should be aware that restoration costs a great deal of money, and the Free Irish State had limited funds. Buildings had to be prioritised after the damages had been done.

When Ireland joined the European Union in 1973, the move created a large endorsement of Ireland’s architectural history. So when the preservation of both buildings in later decades (Dublin Castle underwent a restoration program in 2004) could be indicative of changed attitudes to the abandonment of British buildings in Ireland. It could be argued that the ‘modern’ feature of the building could be counterbalancing the harsher aspects of the buildings earlier historical significance. This could show the spirit of Ireland’s built heritage, as the Irish government stated that only Irish materials could be used in restoration projects.

An example of this is The Custom House. In 1921, The Irish Republican army destroyed the building by burning it down in order to bring chaos and disorder to British rule. The Free Irish State had the house rebuilt with Ardbraccan limestone, a darker stone than the Portland limestone which was originally used and shipped from England, and was completed in 1928. So here we can see that not only was the building used to promote Ireland’s built heritage, but also to encourage the use of Irish resources.

From these few examples, we can see that Ireland has been shaped, and continue to be shaped by their built heritage, both before and after the British occupation. The approaches to the Irish buildings have changed over the decades and the restoration and neglect of their visible heritage are important factors in Ireland’s built heritage.

Laurence, Anne (2008) AA100 The Arts Past and Present – Tradition and Dissent – Ireland: The Invention of Tradition, The Open University, Milton Keynes.