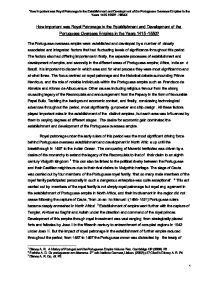 How important was Royal Patronage in the Establishment and Development of the Portuguese Overseas Empires in the Years 1415-1550? The Portuguese overseas empire were established and developed by a number of closely associated and integrated factors that had fluctuating levels of significance throughout this period. The factors also had differing importance in firstly, the separate processes of establishment and development of empire, and secondly in the different areas of Portuguese empire; Africa, India and Brazil. It is important to discern in which area and for what process they were most significant to and at what times. The focus centred on royal patronage and the historical debate surrounding Prince Henrique, and the role of notable individuals within the Portuguese empire such as Francisco de Almeida and Afonso de Albuquerque. Other causes including religious fervour from the strong crusading legacy of the Reconquista and encouragement from the Papacy in the form of favourable Papal Bulls. Tackling the background economic context, and finally, considering technological advances throughout the period, most significantly gunpowder and ship design. All these factors played important roles in the establishment of the distinct empires, but each area was influenced by them to varying degrees at different stages. The desire for economic gain dominated the establishment and development of the Portuguese overseas empire. Royal patronage under the early rulers of this period was the most significant driving force behind Portuguese overseas establishment and development in North Africa up until the breakthrough in 1497 to the Indian Ocean. The conquering of Maranid territories was driven by a desire of the monarchy to extend the legacy of the Reconquista to that of their claim to an eighth century Visigoth kingdom.1 This can also be linked to the political rivalry between the Portuguese and their Castilian neighbours due to their rival claims to Visigothic heritage. The siege of Ceuta was carried out by four members of the Portuguese royal family; 'that so many male members of the royal family participated personally in such a dangerous enterprise ...read more.

So although the role of individuals was an important factor in the establishment of Portuguese empire, the transcending aims of economic gain and the continuation of the crusading tradition, even in the Indies held more significance. This method of control and authority over the Indian Ocean through military force in capturing key ports and using a series of fortresses though was a direct consequence of the role Albuquerque played. But besides the strong governorship of India's viceroys it was the Portuguese settlers who became immersed in the local culture encouraging trade, prosperity and control of not only the official, but also the unofficial empire of merchants and private explorers. Putting this in the context of one hundred years, though being not involved until the mid-point of this period, it is vital not to overstate their significance and importance and their true impact was greatly reduced in importance to the establishment and development of Portuguese overseas empire. The roles of the Viceroys of India, although seeming to be autonomous leaders following a loose guideline set forth by the crown, were influenced by their religious fervour and in their clear economic aims as evidenced by their captured ports. The development of Eastern Portuguese Empire was not as a result of the viceroys of India, but was a product of the methods adopted by Albuquerque and the Portuguese settlers for other reasons as previously stated. When putting this into the context of the entire period these two significant men covered a period of twenty years only. When also taking into account the role of Prince Henrique, as a pioneer, the impact of individuals' actions was limited. But the two viceroys can be credited with the establishment of the Eastern Empire. Its development and the control of the region were due to the policies of the two men. The time of expansion under the two viceroys was of greater significance than royal patronage throughout the entire period. ...read more.

The impact of technology was certainly an enabling factor to the Portuguese empire, providing access to the areas that were colonised through more advanced vessels and navigational methods under Da Gama, Dias and others, but in the context of establishing and developing overseas empire it was rather insignificant and its impact was greatly reduced throughout the period of time. Due to this fact the impact of the technological gap enjoyed by the Portuguese over their opponents becomes increasingly less important, and obsolete early on in the fifteenth century, conversely it served to prevent the Portuguese from extending their empire further, limiting them rather than enabling them to expand. The role of each of these separate factors engaged within the establishment and development of the separate Portuguese empires across the world fluctuated significantly in their importance. Though transcending them all was the desire for wealth and economic gain. The areas targeted for empire were rich in wealth, either in North Africa for grain and slaves, India for the spice trade, and when it became known Brazil and South America for raw materials. Wherever the resource was, the Portuguese followed as in the case of Sofala to Angoche in the gold trade. Although religion can be seen as an underlying factor, the Eastern Portuguese society took on some aspects of the Caste system in order to maintain control in the form of Prazo lordships.26 The technological advantage became obsolete very early within this period and was not as significant as for the Spanish. The economic success achieved from the Portuguese overseas empire provided respite to the rapid decline of Portugal in Western Europe. Although royal patronage was a strong facilitating cause to the establishment and development of Portuguese overseas empire it provided the opportunity for economic gain which swiftly overcame royal patronage as the most significant factor to the establishment and development of Portuguese overseas empires. ...read more.