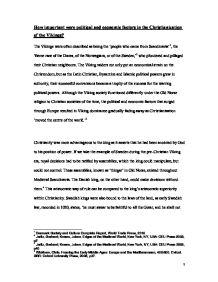 How important were political and economic factors in the Christianization of the Vikings? The Vikings were often described as being the 'people who came from Scandinavia'1, the 'fierce race of the Danes, of the Norwegians, or of the Swedes,'2 who plundered and pillaged their Christian neighbours. The Viking raiders not only put an economical strain on the Christendom, but as the Latin Christian, Byzantine and Islamic political powers grew in authority, their successful conversions became a trophy of the success for the warring political powers. Although the Viking society functioned differently under the Old Norse religion to Christian societies of the time, the political and economic factors that surged through Europe resulted in Viking dominance gradually fading away as Christianization 'moved the centre of the world.'3 Christianity was more advantageous to the king as it asserts that he had been anointed by God to his position of power. If we take the example of Sweden during the pre-Christian Viking era, royal decisions had to be ratified by assemblies, which the king could manipulate, but could not control. These assemblies, known as 'thingar' in Old Norse, existed throughout Medieval Scandinavia. The Danish king, on the other hand, could make decisions without them.4 This aristocratic way of rule can be compared to the king's aristocratic superiority within Christianity. Swedish kings were also bound to the laws of the land, as early Swedish law, recorded in 1020, states, 'he must swear to be faithful to all the Gotar, and he shall not break the true laws of our land'.5 Thus, the ...read more.

The Danish king Harald Bluetooth accepted baptism about 966; Christianity was introduced in Norway from 995 onwards by King Olaf Tryggvason; and in Iceland at Al�ingi in 1000.21 Christianization however, was never a uniform process.22 Many parts of Scandinavia were difficult to reach, and the Christianization of isolated communities took a long time.23 This is summed up perfectly in Bede's letter to Egbert, 'many villages and hamlets of our people are situation in inaccessibly mountains and dense woodland, where a bishop is never seen for many years at a time to exhibit any ministry of celestial grace'.24 Thus the isolated environment in which the Vikings tended to live in rendered the spread of Christianity to the Viking populations a slow process. Due to this geography, it meant that some areas of Viking populations would require more time to covert to Christianity than other populations. It would not be practicable to allow religion to spread, so as a result of this, the political pressures the Christians exerted served as the essential catalyst in converting the Vikings. Christianity brought completely new rituals, beliefs and rules of conduct, such as baptism, burial in the consecrated churchyards without grave-goods, while eating horseflesh, human sacrifice and the worshipping of the old gods were prohibited.25 However, when the pagans were baptized, they often did so without receiving very much instruction in their new faith.26 Perhaps as a result of this, the traditional beliefs and practices did not die out with the advent of Christianity, and were consequently, at least in the case of Sweden (1080), ...read more.