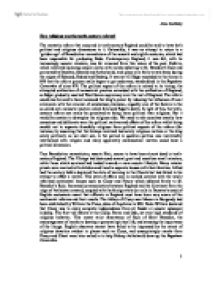 How religious was the tenth-century reform?

How religious was the tenth-century reform? The monastic reform that occurred in tenth-century England could be said to have both political and religious dimensions to it. Ostensibly, it was an attempt to return to a 'golden age' of Benedictine monasticism of the seventh and eighth centuries, which had been responsible for producing Bede. Contemporary England, it was felt, with its increasingly secular minsters, was far removed from this vision of the past. Reform, which involved replacing secular clerks with monks adhering to St. Benedict's Rule and promoted by Dunstan, Oswald and Aethelwold, took place on a fairly erratic basis during the reigns of Edmund, Eadred and Eadwig. It was not till Edgar ascended to the throne in 959 that the reform process really began to get underway, standardised in the Regularis Concordia of circa 970. The political aspect of the reform is related to its timing: the attempted unification of monasterial practice coincided with the unification of England, as Edgar gradually asserted West Saxon supremacy over the rest of England. The reform could also be said to have increased the king's power by reducing the influence of local aristocrats with the removal of secularium prioratus, arguably one of the factors in the so-called anti-monastic reaction which followed Edgar's death. In light of this, the tenth-century reform can easily be perceived as being more political than religious. But it would be unwise to downplay the religious side. We need to ask ourselves exactly how conscious and deliberate were the political motives and effects of the reform whilst being careful not to separate forcefully religious from political aspects of the reform (for instance, by assuming that the bishops involved had solely religious motives or the king solely political): as we shall see, in the period in question politics was inextricably intertwined with religion and many apparently ecclesiastical matters could have a political dimension. True Benedictine monasticism, asserts Blair, seems to have been almost dead in tenth-century England. ...read more.

He and Oswald both experienced exile and Aethelwold must have feared it from time to time. Given that they might have enjoyed more comfortable and stable lives had they not been pressing for reform, it would seem as though the desire Dunstan, Oswald and Aethelwold had to see implementation of strict Benedictinism in England had firm spiritual roots. Whether the same can be said of the royal reasons for monastic reform is a matter of debate. An exceptionally pious king might want to impose what he saw as an ideal form of monastic rule, perhaps as a way of dutifully proving to God that he was fit to rule. However, as we have seen, even kings who initially appear sensitive to the possibility may balk at the idea of large-scale reform once they realise the costs it could incur to them, both financially and in terms of making enemies amongst influential landowners. Could we say therefore that Eadgar realised what his forebears had not: that there were certain political benefits to be gained from monastic reform? Eric John sees the reform movement as a deliberate joint attack by monks and the king on the entrenched interests of local aristocrats, formerly accustomed to the possession of hereditary rights over monastic offices and clerical property. The Regularis Concordia strictly forbade secularium prioratum, which could be interpreted as meaning the direct rule of monasteries by laymen. Interference by local magnates, was, if we are to believe Aethelwold a significant problem. In 'An Old English Account of King Eadgar's Establishment of Monasteries' he warns of the malpractices of local magnates and families which threatened newly revived monasteries, but according to Eric John he is implying that this menace was not new. But while it is undoubtedly true that reform represented a mutually advantageous alliance between the king and monks, John's analysis is flawed. Patrick Wormald has demonstrated that the jurisdictional immunity of the Oswaldslow is a post-Conquest forgery, thereby demolishing John's argument that Eadgar used this to strengthen episcopal authority at the expense of local aristocratic power. ...read more.

of the old communities. At the time of the Norman Conquest, the tiny number of Benedictine houses co-existed with hundreds of small, secular minsters. Furthermore, nearly all the reformed monasteries were in the south. If reform was a conscious and deliberate effort to impose royal authority over a newly-unified England, it turned out to be very limited indeed. The English tenth-century monastic revival was certainly not as self-consciously spiritual as the Cluniac movement, and to ignore the fact that both ecclesiasts and the king had major political benefits to be accrued from such a reform would be foolish. However, as has hopefully been demonstrated, it is possible to be too cynical. While these political advantages with hindsight might look as though they had been purposefully and carefully thought-out, they may not have been obvious before the reform took place. And while we must be careful of too readily believing the words of their sometimes sycophantic biographers, the ecclesiastical reformers' unstinting adherence to their aims, despite periods of unpopularity exile, demonstrates the passion that allegiance to the Rule of St. Benedict could incite. This unstoppable zeal for reform on their part must have affected the actions of King Eadgar, who took advantage of the strengthening of Wessex's control over the rest of England and the increase in the wealth of the crown to commit himself to a reform programme. While he may have given some thought to the possible political benefits (for instance, by thinking along Carolingian lines), Eadgar's keenness definitely seems to have had a spiritual side to it, although this may have been selfish. Lastly, although the Regularis Concordia can seem at times to be overtly political, it is simply the product of an age in which politics and religion operated extremely closely together. Monastic revival was therefore part of a larger process of religious revival which was inspired by the political regeneration and unification of England. ...read more.