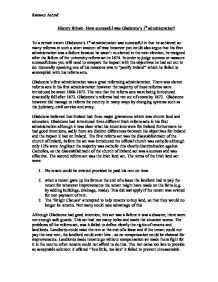 how succesful was Gladstones first administration?

This did not apply if the tenant was evicted for non-payment of rent. 3. The "Bright Clauses" attempted to help tenants to buy land, so that they would no longer be tenants. Not many could take advantage of this Although Gladstone had good intention, this act was a failure it was a disaster, there were not enough safe guards. This act had too many holes and made the situation worse. The problems of the reform act, was it failed to define clearly the rights of tenants and landlords. Landlords could raise the rent at the end of a lease and if the tenant could not pay the new rent, the landlord could evict him - so no compensation could be claimed for improvements. Landlords made tenants go without compensation or made them fight for it in the courts: often tenants could not afford to do this. The Act came too late to provide an acceptable solution: it offered "Too little, too late" it failed to prevent unreasonable rent increases. ...read more.

The education acts introduced school board and compulsory education between 5-13. The vote had been extended to the working class so the working class had now needed to be educated. The judiciary system was long and complicated and most important factor was it was cost to much money so the system was simplified and so was the cost. Gladstone also introduced other reforms such as social reforms which tackled alcohol. Alcohol was the main cause of poverty, crime and violence. The reforms offended the laissez fair principle, however it was a success in tackling main causes of crime and especially violence. In conclusion Gladstone was successful to a certain extent he did manage many reforms however he did not manage to stay in government the following election which does indicate, that he did fail in the end. He also failed his mission to "pacify Ireland" all though he had one good reform the rest of the reforms were failures. However Gladstone did have success as a great reforming government he managed to reform Ireland, key institutions and removed unjustified privileges. Society was also reformed. ?? ?? ?? ?? Razwan Ashraf ...read more.