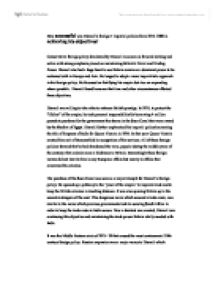 How successful was Disraeli's foreign + imperial policies from 1874-1880 in achieving his objectives? Conservative foreign policy dominated by Disraeli was seen as forward looking and active with strong emphasis placed on maintaining Britain's Naval and Trading Power. Disraeli also had a huge heart to see Britain remain as a dominant power to be reckoned with in Europe and Asia. He longed to adopt a more imperialistic approach in his foreign policy. He focussed on fortifying his empire but also on expanding where possible. Disraeli found however that time and other circumstances affected these objectives. Disraeli was willing to take risks to enhance British prestige. In 1875, to protect the "lifeline" of the empire, he took personal responsibility for borrowing 4 million pounds to purchase for the government the shares in the Suez Canal that were owned by the khedive of Egypt. Disraeli further emphasized his imperial policy by creating the title of Empress of India for Queen Victoria in 1876. In that year Queen Victoria created him earl of Beaconsfield in recognition of his services. ...read more.

In May 1876 Disraeli halted calls made by Russia, Austria-Hungary, and Germany to deal jointly with Turkey, which was faced with revolts and mass uprisings. The public back home, were strongly against the atrocities occurring in Turkey, and supported Gladstone's ideas that Britain should step in and side with the other European powers. However, Disraeli was wary of the Russian forces influence in the east and was non committal. He believed a weakened Turkey would allow Russia to walk straight into Constantinople and further their expansion. Disraeli wanted to maintain the traditional support of Turkey for trade and other issues. He was also suspicious of the Russians greedy and sly ambitions. In halting Russia's advances, he helped maintain his objective of maintaining solid trade with the Turks, along with keeping Britain's honour as a force in imperialistic matters. Disraeli's view that imperialistic matters were more important than the mere 'coffee house babble' of mass massacres in Turkey were justified when the Russians attacked Turkey in April 1877. Opinion swung back to his side, and in 1878 Disraeli sent a British fleet to the east. ...read more.

The Viceroy of India marched into Afghanistan at short notice due to his fear over Russian influence, as well as the commander in South Africa waging war on the uncivilised Zulus. Crushing defeat in South Africa and unnecessary slaughter in Afghanistan tinged what seemed to be a hugely successful campaign. In conclusion, we can see that Disraeli had many issues to contend with which made his foreign policy rather difficult to stick to. He wanted to hold to his policy of staying a dominant power in the east, whilst keeping Britain safe with trading partners. Disraeli managed to halt the charge of "The Russian Bear" into his territory and thus fortify Britain's Empire. In addition to this we can see that through the treaty of Berlin, Britain gained the island of Cyprus; although small, still an expansion. This was one of Disraeli's objectives which we can clearly see he succeeded in. Disraeli managed to keep all his objectives throughout a torrid time of change in the east. The only downside to his policy was the happenings with the Zulus and the Afghans. These are only minor upsets in the short term in comparison to the major successes of the Eastern Question and Suez Canal that achieved Disraeli's objectives for the long term. ...read more.