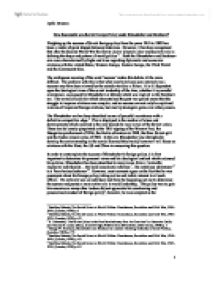 How Successful was Soviet Foreign Policy under Khrushchev and Brezhnev

How Successful was Soviet Foreign Policy under Khrushchev and Brezhnev? Weighing up the success of Soviet foreign policy from the years 1953 to 1982 has been a matter of great dispute between historians. However, it has been recognised that after the Second World War the Soviet Union 'played a clear and decisive role in defining the shape and pattern of world politics'1. Both the Khrushchev and Brezhnev eras were characterised by highs and lows regarding diplomatic and economic relations with the United States, Western Europe, Eastern Europe, the Third World and the Communist-bloc. The ambiguous meaning of the word 'success' makes this debate all the more difficult. The problem with this is that what may have been seen internally as a success may have been viewed by the outside world as a failure. It is all dependent upon the ideological aims of the soviet leadership of the time, whether it is peaceful coexistence, as pursued by Khrushchev or d�tente which was implicit in the Brezhnev era. The waves of cold war which characterised the post-war period meant that the struggle to improve relations was complex, and so success can not only be explained in terms of improved foreign relations, but also by strategical gains over other powers. The Khrushchev era has been described as one of peaceful coexistence with a definitive competitive edge.2 This is displayed in the number of crises and developments which occurred in the near decade he was in rule of the Soviet Union. These can be loosely pinpointed as the 1955 signing of the Warsaw Pact, the Hungarian predicament of 1956, the Berlin ultimatum in 1958, the Sino-Soviet split and the Cuban missile crisis of 1962. ...read more.

Khrushchev's motive for this was yet again a defensive measure. The US had missiles in Turkey so it was reasoned that placing missiles just off the coast of Florida would restore nuclear parity. Also, this would give the USSR a socialist ally in the West, right on the doorstep of the biggest capitalist superpower in the world. However, Khrushchev failed to calculate the severity of the American reaction to this. In a move that Yanov claims 'lacked subtlety and sophistication'14, Khrushchev had managed to bring the world to 'the brink of nuclear war'.15 Not the sort of actions one would expect from a man who supposedly pursued the policy of peaceful coexistence. The US did not offer to resolve the issue diplomatically, the Soviet Union was ordered to remove the missiles or face a nuclear war. The US Strategic Air Command was put on the highest state of alert. Eventually, Khrushchev decided against risking nuclear war with the US, in the knowledge that this would result in the obliteration of the USSR. Khrushchev was forced to announce publicly the dismantling of the weapons and was required to step down. This sequence of events was catastrophic for Khrushchev's career. In 1964 he was forced to retire, most probably due to the humiliation that he had caused the Soviet Union in the face of the West. In 1963 the Soviet Union signed a Limited Test Ban treaty with the US in an attempt to curb the likelihood of such a standoff occurring again; however, it was too late to deny that Khrushchev had demonstrated the military weakness of the Soviet Union to the world. He had posed 'the most dangerous Soviet challenge to the US'16 and had lost. ...read more.

However, in regards to internal socialist policy it was important for Brezhnev to retain his authority over the communist-bloc, assuming that this was not an issue which would affect relations with the West. This is a theme which was recurrent throughout the rule of both Khrushchev and Brezhnev, and was one of the main reasons that d�tente was doomed to failure. The Polish risings of 1980-1 were the breaking point for d�tente with the West. The loss of Poland was deemed 'completely unacceptable'28 to the Soviet Union, despite the fact that an invasion would be catastrophic for Brezhnev's diplomatic prospects. Reagan and Thatcher had already resisted d�tente and the Soviet actions in Poland only served to authenticate their rhetoric. Brezhnev and his leadership lost their legitimacy, and their rule 'sank into terminal decline'.29 It revealed to the world the underlying weakness of Soviet power in the East and the fragility of communist loyalty to the state outside the USSR.30 Both Khrushchev and Brezhnev aimed to improve international relations whilst maintaining rule in the communist-bloc. This resulted on relations with both the West and the communist bloc becoming fractured beyond repair. However, they both were willing to offer to embark on a reduction of tensions with the West; such personal initiatives were unheard of from the Soviet leadership before Khrushchev. Under Khrushchev, the Soviet Union was brought into world politics, challenging the US for paramountcy.31 One of the reasons that ultimately both reigns were rather unsuccessful with international relations in the eyes of the West was due to the fact that both failed to recognise that domestic and foreign affairs were intertwined, a change to one led to a change on the other. ...read more.