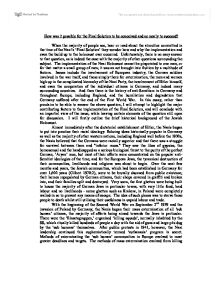 How was it possible for the Final Solution to be conceived and so nearly to succeed?

How was it possible for the Final Solution to be conceived and so nearly to succeed? When the majority of people see, hear or read about the atrocities committed in the time of the Nazi's 'Final Solution' they wonder how and why the implementation and even the build up to the holocaust ever occurred. Unfortunately, there is no easy answer to that question, as is indeed the case with the majority of other questions surrounding the subject. The implementation of the Nazi Holocaust cannot be pinpointed to one man, or for that matter a small group of men; it was an act brought into fruition by a multitude of factors. Issues include the involvement of European industry, the German soldiers involved in the war itself, and those simply there for extermination, the men and women high up in the complicated hierarchy of the Nazi Party, the involvement of Hitler himself, and even the cooperation of the individual citizens in Germany, and indeed many surrounding countries. And then there is the history of anti-Semitism in Germany and throughout Europe, including England, and the humiliation and degradation that Germany suffered after the end of the First World War. In this essay, rather than proclaim to be able to answer the above question, I will attempt to highlight the major contributing factors to the implementation of the Final Solution, and will conclude with an impartial view of the issue, while leaving certain elements of the question still open for discussion. I will firstly outline the brief historical background of the Jewish Holocaust. Almost immediately after the dictatorial establishment of Hitler, the Nazis began to put into practice their racial ideology. Echoing ideas historically popular in Germany as well as the majority of other western nations, including England well before the 1930s, the Nazis believed that the Germans were racially superior and that there was a struggle for survival between them and "inferior races." ...read more.

From 1815 onwards, 'das Volk' became common tongue, as Ronnie Landau states, "the term Volk was seen as the national community held together by secret ties of blood" (Landau 1992:83), and this excluded Jews from the 'pure' Germans to an all time higher level. All of these factors combined meant that the two communities were separated by futile hostilities by the time the Nazis came into power, making the integration of the ideologies much easier to accomplish. As a direct result of the Jews being heavily familiar with all the years of unconcealed anti-Semitist behaviour, the capture, confinement and eventual extermination of the 'sub-humans' was also surprisingly unproblematic. Due to their historical acceptance of persecution, the Jews were originally not too wary of the intentions of the Nazi Party. To them the threats appeared to be idle and even the expulsion from their jobs and homes came as relatively little surprise. Possibly what they did not prepare for was the brutality and the efficiency of the hostile acts, which ultimately led many of them to their deaths. As Gordon states, "...many Jews in Germany also refused to believe rumors of what might happen to them...one might assume that the Nazis were successful in concealing their true aims" (Gordon 1984:183). What this statement makes clear is that through good Nazi planning, the Jewish population of Germany, and later on many other surrounding European countries, recognized that the Nazis meant to do them harm but anticipated "normal" anti-Semitist discrimination - perhaps a short period of hardship followed by Hitler's fall - but nothing vaguely similar to the unprecedented slaughter that occurred. Of course, the majority of the so-called 'perpetrators' involved in the Final Solution were soldiers of the Third Reich, and specifically, the SS. There is a large debate surrounding the question over whether the SS men can be dubbed as victims or perpetrators in the war. ...read more.

One might say that the answer to any of these questions is still the same; that it is impossible to know, now or perhaps ever. One thing does remain clear, in that the Final Solution did not occur because of one event, one person, or even one particular organization. The Final Solution came into materialization and near success because of a multitude of factors. The reasons for the Final Solution cover every aspect of German life at that time, from the dictator to the civilian. Where the Nazis were at fault for their terrible experiment in mass genocide, the German citizens were at fault for their ignorance to the actions of the country. Where both Hitler and German industry may possibly have been innocent of giving the order for the Final Solution to commence, both of them worked in unison to fund and create a horrifying dictatorship which committed the worst act of mass murder and destruction the world has ever seen. The Final Solution was a large scale operation, with many jobs that had to be performed by many different people. As a result, many people are at fault for the near-total destruction of the European Jews, and whether they were highly involved in the mechanics of the operation themselves or not, every individual must accept a degree of responsibility for the acts of their country. It is difficult to answer the question of how and why the Final Solution occurred without understanding the minds of those people and institutions involved. However, the single thing that one can comprehend is that everything that happened before, during and after the Holocaust was implemented by humans, as remarked by Gordon when she says, "therein lies a tragedy of the human, and not only the German, condition" (Gordon 1984:316). If we can't fully understand how or why the devastating events happened, then at least we can learn from them and not allow something of such an appalling magnitude to happen again. ...read more.