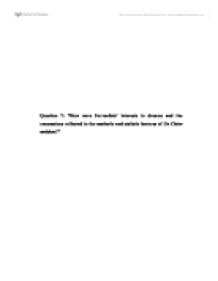 &quot;How were Surrealists' interests in dreams and the unconscious reflected in the aesthetic and stylistic features of Un Chien andalou?&quot;

Question 7: "How were Surrealists' interests in dreams and the unconscious reflected in the aesthetic and stylistic features of Un Chien andalou?" Largely free of production constraints, short, experimental and deliberately shocking, Un Chien andalou is considered by many to be one of the most notorious expressions of surrealism on film in the last century. At its most radical, the surrealist movement asked us to rethink fundamentally our preconceptions about cinema; to challenge and subvert. The film allowed the rapid entry of its two young directors, Luis Bunuel and Salvador Dali, into the Surrealist movement. Films of this movement had been unsuccessful (for example, those of Man Ray and Antoine Arnaud) up until this point; Robert Short explaining that 'Part of the trouble was that Surrealism meant automatism - absolute fidelity to the voice of the unconscious unsullied by rational intentionality. And filmmaking cannot do without forethought, rehearsal and a certain technical expertise.'1 Bunuel himself clarifies that the film's plot is the result of a "conscious psychic automatism', and, to that extent, it does not attempt to recount a dream, although it profits by a mechanism analogous to that of dreams.'2 The surrealists were greatly influenced by Sigmund Freud, the Austrian founder of psychoanalysis. They were especially receptive to his distinction between the 'ego' and the 'id'-that is, between our primal instincts/desires (the 'id') ...read more.

We see other indefinable examples that venture beyond the boundaries of realism- a girl, preoccupied with her mutilated hand is run over by a car on an empty street while an unmoved/ detached crowd ignore what has happened; the male protagonist erases his own mouth and replaces it with hair from the female protagonist's armpit before she is magically transported to the seaside. In addition, the film plays on the spectators' expectations regarding the film narrative as we become more and more frustrated at our lack of identification with the events unfolding in front of us. Surrealists wanted to threaten our complacent acceptance of the world in which we lived- especially those of the bourgeois perceptions of reality. The assault on the viewer's eye at the beginning of the film was adopted through a desire to shock audiences into understanding this concept. In the third section of the film, 'About 3 in the Morning', we experience an exchange between the young man and a stranger, a representation/ image of the young man when he was younger. The scene is, essentially, the portrayal/ depiction/ execution/ personification of the male protagonist's inner thoughts and sentiments, an estimation (projection?) for his internal, intimate drama as he rests and imagines/ contemplates the man he used to be years before, represented by the newcomer. ...read more.

were devices used by both filmmakers in addition to the irrational plot sequences and development. The film has no clear-cut storyline, refusing to respect the priorities of chronology or traditional logic by moving from beginning to end in a simple, direct and incisive manner. Instead, the narrative shifts from past, present, future to hypothesized time-zones of reverie and dream in a confused manner. Aranda explains, 'The spectator is made anxious; his innermost psyche has been violated.'12 The chaotic structure is of course, another stylistic feature utilized by the filmmakers in order to set the film apart from the conventional, ordered textual apparatus of the mainstream narrative film and demonstrate it as a true product of surrealism. It is clear that the entire narrative of Un Chien andalou is driven by the transitory and inexplicable nature of dreams and the subconscious, creating an atmosphere of deranged reverie and the uncanny in unexpected places very much characteristic of surrealism. Bunuel's desire for unconditional freedom and the need to fight against the constricting norms of his provincial middle-class upbringing are what led him to an interest in Freud and Surrealism. His interest in the Surrealistic origins in Freudian dream theory was translated into his work as he filled Un Chien andalou with dream and reverie imagery, as well as man's chaotic, unconscious desires. Purposefully avoiding the didactic, Bunuel chose narrative strategies and visual style as a means of commenting and as a result, creates the provocative, complex, and at times, disturbing world of Un Chien andalou. ...read more.