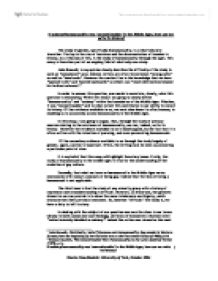 If sodomy/homosexuality was 'unmentionable' in the Middle Ages, how can we write its history?

If sodomy/homosexuality was 'unmentionable' in the Middle Ages, how can we write its history? The study of gender, specifically homosexuality, is a relatively new invention. Tied up in the rise of feminism and the documentation of females in history, as a tributary of this, is the study of homosexuality through the ages. This essay is therefore part of an ongoing field of relatively new study. John Boswell, in my opinion clearly describes the difficulty of the study in such an "unexplored" area. Indeed, writers are often forced down "wrong paths" as well as "dead ends". However the comfort lies in the knowledge that we have "opened trails" and "posted landmarks" so others can "reach destinations beyond his furthest advance".1 In order to answer this question, one needs to ascertain, clearly, what this question is demanding. Within this essay I am going to clearly define "homosexuality" and "sodomy" within the boundaries of the Middle Ages. Whether, it was "unmentionable" and to what extent this contributes to our ability to record its history. Of the evidence available to us, we must also deem its effectiveness, in enabling us to accurately access homosexuality in the Middle Ages. In this essay, I am going to argue, that, through the study of primary sources relating to the existence of homosexuality, we can, indeed, write its history. However the evidence available to us is handicapped, by the fact that it is often written with the intention of pursuing, and even persecuting homosexuals. ...read more.

with other sexual vices on moral and philosophical grounds, without religious argument.15 The literature of the period began to establish a tangible link between Islam and religious non-conformity. This notion was strengthened by the crusades, which brought a flood of anti-Islamic propaganda, including accusations of homosexuality and heterosexual rape.16 Clearly the idea that homosexuality was something to be feared like the wild men in the east resonates itself in literature of the time. Literature of the time however was in a juxtaposition of wanting to inform but not to encourage sinning. So while the language may be very rhetorical it does not give us cause to assume that they were dealing with a wide and large spread issue. Merely, could it of been pandering to those in society who indulged reading moral rants. Corresponding with clerical attitudes secular law divides in two, between relative disregard and religious fervour. Michael Goodich reasons that homosexuality "was not sufficiently widespread" or was not regarded as "an especially moral crime".17 And due to this there seems a relative lack of moral objection. Looking also toward secular legislation, there is a rich vein of primary material, which shows us very clearly how different countries reacted to sodomy. In France strict measures began to be introduced to combat sodomy, a sliding scale was introduced for first, second and third time offenders, indeed many took the laws to mean death, though this was not the laws original intent.18 The hardening attitude of legislators in France was mirrored elsewhere. ...read more.

We are able to write its history not simply because we have evidence, we also want to write its history there are so many studies by so many authors which attempt to provide a new insight means that there has to be enough to interpret. I think that that is the buzzword of this essay 'interpretation' because while we do have the information what we do with it and how we interpret it are as this essay has shown one of great debate. In writing this essay it has become very apparent to me that in the field of gender studies there is a need to find sex. This is where although we have shown it is there, possibly there is a danger of over emphasising it. I began this essay by echoing John Boswell, I feel I must end it, by finding solace in D.M Hadley writing; "In such matters we must be careful not to project on to a less erotically preoccupied society the artificially stimulated and commercially exploited eroticism of our own sex-ridden age."28 If one point reverberates constantly, in this essay, as well as this writer's thinking is that the study of, and interpretation, of homosexuality in the Middle Ages is to feed, firstly; our need for scandal and intrigue of illicit love, which is seemingly insatiable. Secondly, to fulfil an intense desire to ensure that no one in our society is marginalized. Thirdly, and in my opinion most importantly, while those in the Middle Ages sought to console themselves by ensuring minority groups were completely marginalized, we feel we are better people by trying to give a lot of history to everyone, when maybe, it's not there. ...read more.

This essay is well written, makes a good argument and considers the nuances of the subject matter well. It is occasionally too colloquially written, and could be improved by using more formal language.