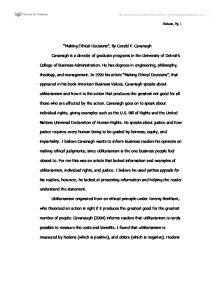 In 1990 his article Making Ethical Decisions, that appeared in his book American Business Values, Cavanagh speaks about utilitarianism and how it is the action that produces the greatest net good for all those who are affected by the action.

Cavanagh is a director of graduate programs in the University of Detroit’s College of Business Administration. He has degrees in engineering, philosophy, theology, and management. In 1990 his article “Making Ethical Decisions”, that appeared in his book American Business Values, Cavanagh speaks about utilitarianism and how it is the action that produces the greatest net good for all those who are affected by the action. Cavanagh goes on to speak about individual rights, giving examples such as the U.S. Bill of Rights and the United Nations Universal Declaration of Human Rights. He speaks about justice and how justice requires every human being to be guided by fairness, equity, and impartiality. I believe Cavanagh wants to inform business readers his opinions on making ethical judgments, since utilitarianism is the one business people feel closest to. For me this was an article that lacked information and examples of utilitarianism, individual rights, and justice. I believe he used pathos appeals for his readers, however, he lacked at presenting information and helping the reader understand the statement.

Utilitarianism originated from an ethical principle under Jeremy Bentham, who theorized an action is right if it produces the greatest good for the greatest number of people. Cavanaugh (2004) informs readers that utilitarianism is rarely possible to measure the costs and benefits. I found that utilitarianism is measured by hedons (which is positive), and dolors (which is negative). Hedons and dolors can be defined by pleasure, happiness, ideals, and preferences. You must calculate how many people will be affected, negatively (dolors) as well as positively (hedons). You then choose the action that produces the greatest overall amount of utility and subtract hedons from dolors or vice versa (Lawrence M. Hinman, 2010, p. 19). Cavanagh writes on how an individual should think before they do something. The challenge in utilitarianism is failing to completely know the outcome. It is understandable that one could not predict the future, but could only hold a probable guess. Cavanagh keeps his readers attention by writing metaphors or phrases the audience can connect to, for example, “The Golden Rule”, “Do unto others as you would have them do unto you” (Cavanagh, 2008, p. 236). With Individuals having to make choices on utilitarianism, they are protected by individual rights.

Individuals throughout society have their own distinctive explanation of justice. Cavanagh writes that justice requires all persons to be guided by fairness, equity, and impartiality.  The standards of justice are more important than the utilitarian consideration of consequences. He speaks how justice is largely based on the moral rights of individuals, and is not as often in conflict with individual rights as are utilitarian norms. Cavanagh used pathos when he compared justice to the apartheid treatment of blacks in South Africa. However, he failed to explain what happened during the apartheid treatment of blacks in South Africa. When I think of justice I think of the criminal justice one faces when they commit a crime. There are always laws that can be broken and consequences that must follow.

In Cavanagh’s article he is giving his opinion on utilitarianism, individual rights, justice, and how those should help individuals make decisions.

My understanding of the article is that people make decisions everyday that could have been different if thought through ethically. The details of the decisions will always be different from one person, and one group, to the next. An ethical decision should be made to promote the moral good of a group, and ideally all of humanity, without intentional or foreseeable harm to any other individuals or groups in the process. I believe Cavanagh is credible in writing an article such as this. I trust what Cavanagh states in his article, and even though there were a few statements I didn’t understand, he was still able to connect to me as a reader.