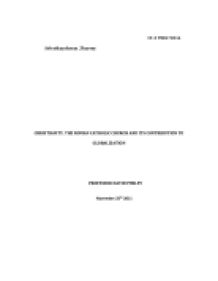 In the minds of Roman Catholics living in the North America, regardless of abortion being legalized, it is still viewed as a sin

﻿ST. # 998170214 Selvathayabaran ,Tharrny CHRISTIANITY, THE ROMAN CATHOLIC CHURCH AND ITS CONTRIBUTION TO GLOBALIZATION PROFESSOR DAVID PERLEY November 25th 2011 In the globalized world today, Roman Catholics in North America are having a difficult time in finding a balance between the region where they reside and their own beliefs. The contestation over the reasons in which a woman maybe permitted to terminate a pregnancy has not lent itself into having a straightforward resolution. Religious opinions on the subject have further played an essential role. Regardless of religious adherence, abortion in the United States has been made legal in the earlier months of pregnancy, and with restrictions in later months based on privacy of rights. In the minds of Roman Catholics living in the North America, regardless of abortion being legalized, it is still viewed as a sin, because ?from the moment of conception the embryo is a living person? (Wassmar 3). Therefore killing a foetus, is considered murder in their view, and murder is a sin in accordance with the Ten Commandments. This religious viewpoint is present due to the internal religious artefact, the bible. According to Peter Beyer ? Religiousness might be broadly present in the consciousness of individuals, but it would have a great deal of difficulty having an real social effect? (Beyer 98). ...read more.

Because the bible is an internal document supported only by Roman Catholics it is powerless in comparison to the globalized legal function system. Not only does the interpretation interfere in legal function systems, but further in the political function systems. The tension between political parties and Roman Catholic Churches arise, because certain political parties are in favour of abortion, and certain are anti-abortionists. Every time a political party is elected in the United States, it changes face due to the totalizing view of the specific parties policies. In the words of Mark A Noll, author of A history of Christianity in United States and America, ? the religious landscape seems to be divided between those who favour a ?civil religion? of tolerance , expression and civility on the one hand and those who favoured a ?civil religion? of tradition , restraint and moral courage on the other? In other words, strict Roman Catholics are more conservative in a sense that they believe abortion on demand is an affront to moral law (Noll 455) and they prefer take a pro-life stand. Their reasoning for pro-life: the scriptures. For example, in the book of Psalm (139; 13-16) there is a great portrayal of Gods? involvement with the unborn. ...read more.

To conclude, the Roman Catholic Church is a highly centralized bureaucratic organization. Authority is invested in the notion of being sacred. This ?sacredness? comes from the Holy Bible. The Holy Bible plays a major role in each and every one of the principles that are known to Roman Catholics today. However the Roman Catholic Church uses the internal document, the bible, which is not accepted by every individual to attempt to create a all-inclusive policy. The policy being that abortion should be illegal everywhere, because it is a sin to kill a foetus. However in a globalized world, this attempt to interfere causes tensions in society because of the different functions system already in place. Roman Catholics trying to impose the pro-life policy they are causing a great amount of tension within both the political and legal function systems in Northern America. As earlier mentioned, ?Religiousness might be broadly present in the consciousness of individuals, but it would have a great deal of difficulty having an real social effect? (Beyer 98). What Peter Beyer is saying is that, the Roman Catholic views of abortion will always face challenges when trying to interfere with other function systems because religion is always at odds with modern society. Function systems such as politics, legal rights, economics, media will always have a social effect on latter operations in a compressed world unlike religion , a mere subsystem. ...read more.