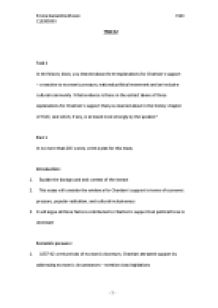 In this essay I shall consider how all three explanations contributed to Chartisms support and which factor can be seen as the most dominant.

﻿Emma Samantha Moxon Y180 C1839595X TMA 02 Task 1 In the history block, you learned about three explanations for Chartism?s support ? a reaction to economic pressure, national political movement and an inclusive cultural community. What evidence is there in the extract above of three explanations for Chartism?s support that you learned about in the history chapter of Y180, and which, if any, is stressed most strongly by the speaker? Part 1 In no more than 200 words, write a plan for this essay Introduction: 1. Explain the background and context of the extract 2. This essay will consider the evidence for Chartism?s support in terms of economic pressure, popular radicalism, and cultural inclusiveness 3. It will argue all three factors contributed to Chartism?s support but political focus is dominant Economic pressure: 1. 1837-42 were periods of economic downturn, Chartism attracted support by addressing economic circumstances ? mention class legislations 2. Manufacturing population under-represented in the electoral system 3. Mention Asa Briggs, secondary source 1, who highlights the significance of economic circumstances A national political movement: 1. Indicate how Chartism was built on pre-existing support for electoral reform 2. State the popular proposed class legislation changes 3. Use primary source 6 to show the heritage of popular radicalism and the public?s want for reform 4. ...read more.

Chartist?s [s]had their own political language and this is strong evidence for Chartism being a political movement[t], the extract uses such language to encourage listeners[u] support, for example, ?these evils chiefly of a political and social cast arise from one source ? class legislation? (L.20-L.21). Steadman Jones, secondary source 2, supports this notion by stating ?the growth and decline of Chartism was a function of its capacity to persuade its constituency to interpret distress or discontent within the terms of its political language? (p.37[v]). Evidence for Chartism been[w] an inclusive cultural community also exists in the extract. The movement did not adhere to the times? hierarchical style of society as it allowed anybody to join[x], the speaker demonstrates the movement?s inclusiveness by addressing women who were often excluded from politics, ?I am glad to meet the brave men and fair women of York? (L.10). Chartism was all-embracing of the working classes; six working men were deliberated included on the committee that discussed the People?s Charter. The speaker addresses this group several times with ?Working men? (L.1), ?Honourable gentlemen, I mean by this name the working class only? (L.17), and ?the labouring class, are regarded as a cipher in importance? (L.22-L.23). Ellen Yeo, secondary source 3[y], states the working classes were quite capable of creating their own politics just as they were proficient manufacturers in the economy. ...read more.

(ed) (1959) Chartist Studies, cited in Making Sense of the Arts- Resource Booklet 1, (2011) Milton Keynes, The Open University, p.36. Does this help? We can discuss at your next tutorial, if it helps. - - [a]A very good plan here, Emma. It is well-organised and well-structured. Your ?content? looks well-chosen and you indicate ?sources? to be used. A great start! [b]Good. [c]Try to avoid using ?I? or the personal form in the essay. Instead, have, ?This essay will consider?? This gives an impersonal, more academic style to the essay format. [d]An excellent point to make, challenging the ?reliability? of a partial source. Well-observed and commented on. [e]As ?audience? is a plural, your apostrophe goes before the ?s?. [f]Yes, this is all possible! Good work. [g]Full-stop here. Take out ?I? and maybe write, ?However, political focus appears to be the key theme?. [h]A questioning and critical introduction. This is such a good start, Emma. Well-done! [i]Full-stop after ?factor?. [j]Yes, good. [k]Do you mean the working classes were under-represented in ?agricultural? areas? [l]Good reading of the evidence here. [m]Try to introduce any writers/sources you use. Here, it could be: ?Historian, Briggs, (1959) in this secondary source, supports?.? Make sure you adhere to the correct referencing style. See the Assignment Booklet, p.16. [n]Good use of evidence here, Emma. [o]A strong opener to this section. You are answering the question ?head on?. Good approach and you are writing well. [p]Your reference here is: the Morning Chronicle (1842) primary source. ...read more.