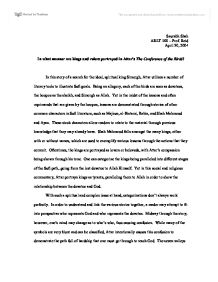 In what manner are kings and rulers portrayed in Attar's The Conference of the Birds?

Saurabh Shah ARLT 100 - Prof. Reid April 30, 2004 In what manner are kings and rulers portrayed in Attar's The Conference of the Birds? In this story of a search for the ideal, spiritual king Simorgh, Attar utilizes a number of literary tools to illustrate Sufi goals. Being an allegory, each of the birds are seen as devotees, the hoopoe as the sheikh, and Simorgh as Allah. Yet in the midst of the lessons and often reprimands that are given by the hoopoe, lessons are demonstrated through stories of other common characters in Sufi literature, such as Majnun, al-Bistami, Rabia, and Shah Mahmoud and Ayaz. These stock characters allow readers to relate to the material through previous knowledge that they may already have. Shah Mahmoud falls amongst the many kings, either with or without names, which are used to exemplify various lessons through the actions that they commit. Oftentimes, the kings are portrayed as lovers or beloveds, with Attar's compassion being shown through his tone. One can categorize the kings being paralleled into different stages of the Sufi path, going from the lost devotee to Allah Himself. ...read more.

The king mentions in this specific story, "Then hang him upside-down until he's dead -/And then those chosen for my love will see/Their eyes should glance at no one else but me" (225). Therefore, this tyrannical representation of both kings and God does not seem to be an exaggeration or a misconstrued view in any way when taking all aspects into consideration. One's heart should be devoted to God and God only; putting other superfluous loves aside was a theme throughout the poem. Once again, elements become murky when the king is seen as drunk and addressing his own "Lord" (228). How can God become intoxicated and commit any mistakes if He is the idea of perfection? The key emphasis is the relationship between the God and devotee - in a relationship, both sides learn from mistakes that they commit. The boy/devotee goes through a process of realizing that his love should remain only towards king/God, who in turn comprehends that errors may occur along the Way. He says, "You loved me and you died for me; what fool/Would smash, as I did, his most precious jewel?" (227). Referring to the devotee/boy as his "precious jewel," the king/God comes to recognize that the love still exists. ...read more.

Many Sufi principles have "intoxicated mysticism" weaved throughout, and it is not a surprise that God's response would be similar in severity (harsh response for a harsh crime). Thus, the intensity of the relationship between God and devotee is illustrated through the actions that the pauper/devotee takes and the tyrannical king's/God's response. Within these two stories, the king has been portrayed as a tyrant, but one who punishes the fitting crimes. Such a portrait paints various pictures: the lesson is illustrated from the hoopoe, a reader can digest the information in a story format by making metaphorical comparisons, and most importantly, the lesson between devotee (who the reader most likely would be) and God is clearly shown. This also paints a harsh reality as to what God may do according to the actions that one takes, but at the same time, gives the viewpoint that God can be forgiving if one can rectify his or her mistakes. The complexity of the relationship is shown through Attar's speech and often confusing labels that one attempts, but the simplicity is drawn through the lessons learned and the actions taken by each person in the bond. Through this amazing allegory, Attar has given the Sufi world a new light of a "king" that wishes for obedience and worship only. ...read more.