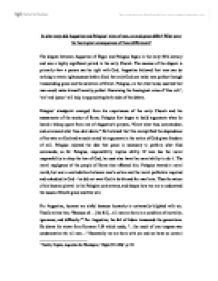 In what ways did Augustine and Pelagius' view of man, sin and grace differ? What were the theological consequences of these differences?

In what ways did Augustine and Pelagius' view of man, sin and grace differ? What were the theological consequences of these differences? The dispute between Augustine of Hippo and Pelagius began in the early fifth century and was a highly significant period in the early Church. The essence of the dispute is primarily how a person can be right with God. Augustine believed that man can do nothing to attain righteousness before God: that only God can make man perfect through transcending grace and the salvation of Christ. Pelagius, on the other hand, asserted that man could make himself morally perfect. Examining the theological roles of 'free will', 'sin' and 'grace' will help in appreciating both sides of the debate. Pelagius' standpoint emerged from his experiences of the early Church and his assessments of the society of Rome. Pelagius first began to build arguments when he heard a bishop quote from one of Augustine's prayers, "Grant what thou commandest, and command what thou dost desire." He believed that this exemplified the dependence of the state on God and as such rooted his arguments in the notion of God-given freedom of will. ...read more.

Augustine also denies man's independence from God, realizing that, "once having fallen... [men]...are incapable of recuperation by themselves."6 Recuperation for Augustine, in this sense, comes in the form of the grace of God. Grace, for Augustine, is the force that can make man perfect. McGrath comments that, "Augustine held 'grace' to be the unmerited or undeserved gift of God, by which God voluntarily breaks the hold of sin upon humanity. Redemption is possible only as a divine gift. It is not something which we can achieve ourselves, but is something which has to be done for us."7 Augustine stresses here that the source of salvation is located outside of humanity; in God himself. God initiates the act of salvation and it is something both out of our control, and beyond our capacity to do. Augustine's most powerful assertion, however, is that Christ is this act of grace. Using Romans 5, Augustine draws a strong parallel between Adam and Christ. Romans 5:19 reads, "For just as through the disobedience of the one man the many were made sinners, so also through the obedience of the one man the many will be made righteous." ...read more.

The denial of original sin also reduces the necessity for the sacrament of baptism. Baptism for Augustine is necessary in order to remove the stain of original sin, even though 'certain temporal consequences of sin remain'9 including suffering, illness and death. Even though man can still sin after baptism (actual sins) because of concupiscence (man's inherent bias towards sin), baptism is essential and removes our sins in Adam, and consequently is unnecessary for Pelagians. Finally, and perhaps most importantly, if one considers the doctrine of the Immaculate Conception, in which Mary was conceived without the stain of original sin, then this would not be in keeping with Pelagianism - a doctrine which is of extreme significance to the Catholic Church. The Pelagian controversy is of undeniable theological importance. It encouraged a multitude of theological questions, which through the arguments of Augustine enable the Church to strengthen its views and doctrines. Augustine, if you will, provided a framework for future theological exploration. The issues involved in the controversy are complex and varied, and as such some have established a 'semi-Pelagian' standpoint - the controversy must not be taken as an either/or argument. It is important to establish the right mix of both, as both Augustine and Pelagius are worthy of equal consideration. ...read more.